Ancient Roman Movies in 2014 and Beyond Posted by Brittany Britanniae on Jan 14, 2014 in Uncategorized

Are you sitting? Well you’ve better, this list will blow your mind!

Hercules: The Legend Begins debuted last weekend. The film is based in Ancient Greece, but inaccurately attributes the Latin name “Hercules” instead of the Greek form Herakles.

Next Month, Son of God and Pompeii are hitting the silver screen. Both films are projected to do fairly well. The reconstruction of Pompeii and its destruction should be well worth the cheesy love story.

Plebs follows the story of three desperate young men from the lower classes as they try to partake in sexual intercourse, keep jobs and ascend the social ladder in the big city. Brace yourself for more Plebs! It has been renewed for a second season for  SPRING 2014. “Can the bumbling misadventures of young Romans Marcus and Stylax and their lazy slave with an attitude problem, Grumio, possibly become  more low-brow…or hilarious?”

The Roman: “One lonely Roman general is wounded in battle. He heads toward the woods to die. Once entering the woods he is granted another day by the gods. He meets an Egyptian slave who has left his camp and both men meet in a death ridden forest and are tested.” The film also has a sequel in post-production called The Son of Raw’s the Roman.

ZvG: Zombies vs. Gladiators. With the Zombie craze, this was an inevitable project. The story recounts the story of the first ever zombie horde. A shaman, about to die in the gladiatorial games, casts a spell that unleashes the first  zombie horde. Other gladiators take it upon themselves to stop the undead before the destroy Rome and the Empire! The film will either be campy or gory, but either way- it will allow audiences to be engaged in an ancient setting. The details are the release are not cemented, but the writer-director of the film with be the horror veteran Clive Barker. More release info here.

Mortis Rex (Latin for “King of the Dead”) is set in A.D. 122 near Hadrian’s Wall, as a disgraced Roman has been sent to defend a garrison in remote Scotland  from a spate of mysterious murders. He must unite with the local Druids to vanquish a supernatural beast. This Ancient World Monster Movie should be interesting as it is a project of Peter Briggs (co writer of Hellboy).  More details can be found on the movie’s Facebook page.

Gladiators v. Werewolves : AD 160. beasts beyond the great wall, senses an opportunity to win favour with the Emperor and even a place in the senate. But what will happen to if these beast become part of the Gladiatorial games?  More can be read on it here. 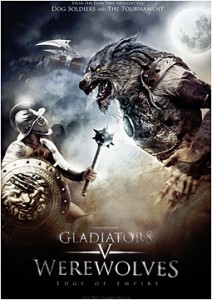 Nicaea  begins with the triumph of the Christian emperor Constantine at the battle of the Milvian Bridge , then proceeds to depict the Council of Nicaea, which established the official creed of state-sponsored Christianity.  Production should begin in 2014 and more details can be found on the movie’s official page.

Mary: “From Mary’s youth to her struggles as a young mother caring for her child, Jesus, up to the age of 12 years old. We will peer into Mary’s life at ages 8, 15, 19 and 27.” IMDB. Odeya Rush will play the title role in the feature film . Ben Kingsley (as Herod) will lend  star-power to the cast.

The Roman: “An origin story of the future dictator as a young general in the Roman army ( a rarely discussed period of his life). Kidnapped by Cilician pirates and enslaved on their prison island, Caesar escapes with his men, and the decisions he makes during this time directly affect the political and social upheaval happening in Rome.” But if you want the real story of Caesar and the Pirates, Roman historian Josiah Osgood explores all the sources here.

The Lost Legion; In 53 BC, the Roman army of Crassus was massacred by Parthian forces at the battle of Carrhae. In the 1940s, Oxford scholar Homer H. Dubs speculated that some of Crassus’s Roman soldiers were taken prisoner and eventually found themselves in the Gansu province of Han Dynasty China. From this intriguing material, scripter Kurt Johnstad  is working on this film.

Cleopatra, Ang Lee (Life of Pi, Crouching Tiger, Hidden Dragon, and Brokeback Mountain) has admitted publicly he would love to explore the untold history of Cleopatra with a film starring Angelina Jolie. Jolie has expressed some mutual interest as well. The film would be an adaptation of Cleopatra: A Life, by Stacy Schiff.

The novel series by Conn Iggulden known as Emperor looks like it will be made into a film. Gianni Nunnari (producer of Alexander, 300, and Immortals)  is working on a movie about the young Julius Caesar based on this novel series 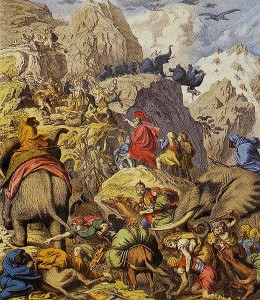 Hannibal and his men crossing the Alps.

Hannibal the Conqueror: Vin Diesel long ago announced his intention to make his directorial debut and star as Hannibal , the Carthaginian general who crossed the Alps with elephants to menace Rome, working from a script by Oscar-winner David Franzoni (Gladiator and King Arthur) based on the novel “Hannibal” by Ross Leckie. Vin Diesel had the following to say on the trilogy last May:

Q:Are you referring to the Hannibal the Conqueror project? A:That’s the hardest one. I was just looking at a script, 10 years old, by David Franzoni, that was my first Hannibal draft. To think that 10 years later, we’re still marching towards the Alps is surreal. Now, after Universal’s seen me produce this Fast trilogy, they are much more cautious about letting [the Hannibal] trilogy go to another studio. Now they feel like: “This is the trilogy guy, this is the guy who thinks in trilogies, he can do that.” There is another studio that’s saying they want to do all three films, do the trilogy.

Q:It sounds like a pretty large-scale undertaking. A:You just keep building. I’ve had Frank Miller in storyboard meetings, where he couldn’t resist taking a pen and drawing out panels for Hannibal. I’ve had Tarantino in my house acting out scenes he’d love to see in the movie. Acting them out! Probably the last great director meeting I had was with Tony Scott. He [told me that] Denzel Washington’s always wanted him to do Hannibal. And he said: “But after looking at the story, after talking to you, we should get Denzel to play your father, Hamilcar Barca.” And that came from Tony Scott, who was just the nicest and most terrific man, one of the nicest directors I’ve ever met in my life.

When your dream’s about to come true, when you’re about to get that shot, it’s like: “Holy s—! Is this really gonna happen? Am I sure I’m ready to immortalize or to channel this spirit that’s been dormant for 2,000 years, and never represented right?”

Rome Sweet Rome: “A unit of current U.S. Special Forces are suddenly transported back to ancient Rome and encounter one of the world’s most legendary villains and disrupt history. To return home, they have to set history back on the track they altered,” is the plot summary so far provided. However, it will be interesting to see what “villain” is being mentioned.

Memoirs of Hadrain:  A film based on Marguerite Yourcenar’s book. Daniel  Craig is rumored to be Hadrian, but there is no news as to who would play Antinius.

I, Claudius (based on the novel by Robert Graves), made news recently that noted the HBO and BBC2 have “joined to remake the mini-series, with the creative team that produced the HBO series Rome in charge.”

Pontius Pilate: Another Brad Pitt rumor(besides his Space themed Odyssey film) has him playing the Roman governor of Judea who sat in judgment on Jesus. Read a description of the screenplay and an interview with writer Vera Blasi here.