Fruit Symbolism in Antiquity Posted by Brittany Britanniae on Sep 2, 2015 in Roman culture

Produce in ancient, agrarian times played a key role in the lives of all. It’s no surprise that fruits and vegetables over the centuries had acquired varying symbolic tones and divine affiliations. Here, listed, are some examples of the most prominent mythological and everyday appearances as well as symbolic meanings ascribed to produce in antiquity. 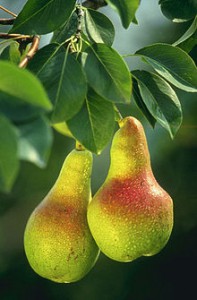 The name pear is derived from Latin pera or pira. Despite carrying generally favorable affiliations, the pear is curiously absent from myth. The pear was listed as one of the “gifts of the gods” in Homer’s (9th century BC) epic poem, The Odyssey and was considered sacred to Juno, Venus, and Pomona. Pliny the Elder (23-79), in his Historia Naturalis, wrote on several types of pears. Interestingly one type was called the Tiberiana “because Emperor Tiberius was very fond of them.” 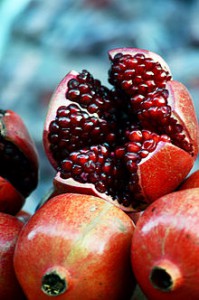 Fruit of Punica granatum split open to reveal the clusters of juicy, gem-like seeds on the inside. Courtesy of WIkiCommons

The pomegranate was popular in antiquity. The fruit and its seeds were often associated with female fertility, and was considered sacred to Juno and Venus. Contrastingly, the overwhelming symbolism often and still attached to the pomegranate would be its reputation as “the fruit of the dead”. One of the most famous myths including the pomegranate is the story of Proserpina and Pluto. After seeing Proserpina, Pluto stole her away to the underworld and from her mother Ceres. Ceres’ distress of losing her daughter caused the land to wither and grow cold. It was a rule of the Fates that if one would eat in the underworld they would be kept there for eternity. Before her rescue, Prosperpina ate seeds from a pomegranate and unknowingly condemned herself to stay in the underworld every year for the time that would be Fall and Winter. As a result of this myth the pomegranate is one of the foods prohibited in the Eleusinian Mystery initiations.

Fresh figs cut open showing the flesh and seeds inside. Courtesy of WikiCommons.

A popular fruit in both Greece and Rome, the fig took on generally favorable associations as being sacred to Ceres and Bacchus, and representing female fertility and femininity due to the appearance of the inside of the fruit. In myth, the fig takes on a contrasting role from the pomegranate. As Ceres was searching for her daughter Proserpina a man who had received Ceres with hospitality was given the first fig tree. From this myth the pomegranate, despite its popularity, was condemned and the fig was introduced into favor.

However, like any symbol, the fig could take on a more versatile meaning in reality. Cato the Elder, in his efforts to persuade the Roman Republic to pursue a third Punic War, presented the Senate with a handful of fresh figs that had been grown in Carthage. More than show the proximity of Carthage to Rome to illustrate the threat Cato used the fig and its symbolism to call the Senate effeminate. 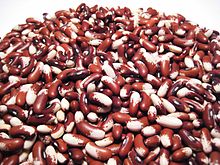 When thinking of beans in Antiquity it might be difficult to remember particular situations or affiliations they had. Beans make this list precisely because they were not only ignored, but neglected, in ancient narratives. Beans, without the solid explanation pomegranates earned, were a prohibited food of the mystery-cult of Ceres. The disrepute of beans was perpetuated by claims that ingesting them caused nightmares or insanity. Oracles wouldn’t eat beans for fear that their visions would become clouded. Both Hippocrates and Cicero avoided them. Roman priests would not even name beans since they were considered impure. Beans, as unpopular as they might’ve been in recipes, served another more civic function. When issues were up for vote in Roman courts the ballots were black or white beans. White representing innocence and black guilt. Despite the culinary neglect beans were also important enough that one of the more influential families, the Fabians, in Rome took it to their name. 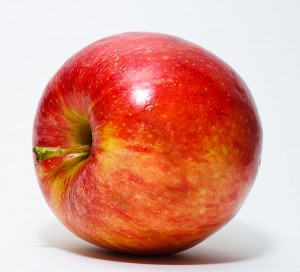 A Red Apple. Courtesy of WikiCommons.

And finally, one of the most popular examples of produce in the symbolism of antiquity would be the apple. With overwhelmingly positive affiliations it was considered sacred to Juno and Venus. The apple was symbolic of love and weddings. To throw an apple at someone was to declare your love for them. An apple caught meant the subject of your affection reciprocated. If they dodged the apple, however, it was another story.

Apples in mythology originated with the creation of the first apple tree as a wedding present from Terra for Juno, the goddess of marriage. Apples, however, were often featured in mythology in a more divine hue. Golden apples appear in a couple of particularly famous myths. The Judgment of Paris, when Paris was told to present a golden apple to the fairest among the goddesses Venus, Juno, and Minerva. Paris chose Venus and was rewarded the most beautiful woman in the world, Helen of Troy.