In honor of the Natale di Roma (the annual birthday celebration of Rome), this post will include 10 factoids about Rome and its founding!

1. The date April 21st  based on the legendary foundation of Rome by Romulus in 753 BC. 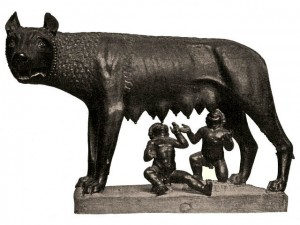 2. The name of the city is generally considered to refer to Romulus, but there are other hypotheses. Jean-Jacques Rousseau suggested Greek “ῥώμη” (“rhōmē“), meaning “strength, vigor”. Another hypothesis refers the name to Roma, who supposedly was the daughter of Aeneas or Evander. 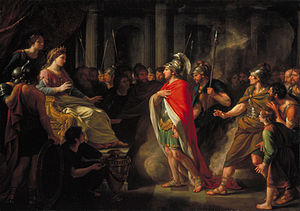 The Meeting of Dido and Aeneas by Sir Nathaniel Dance-Holland

3. The 21st of April was celebrated by the ancient Romans as Parilia or Palilia. It was a festival for Pales with ritual purification for sheep and shepherds. Ashes from the fordidicia were sprinkled on the sulfur-burning bonfire created for the cleansing. This date was also considered the dies natalis or ‘birthday’ of Rome.

Festa di Pales, o L’estate (1783), a reimagining of the Festival of Pales by Joseph-Benoît Suvée. Courtesy of WikiCommons.

“The night has gone: dawn breaks. I’m called upon to sing
Of the Parilia, and not in vain if kindly Pales aids me.
Kindly Pales, if I respect your festival,
Then aid me as I sing of pastoral rites.
Indeed, I’ve often brought ashes of a calf, and stalks
Of beans, in chaste purification, in my full hands:
Indeed, I’ve leapt the threefold line of flames,
And the wet laurel’s sprinkled me with dew.”

Ovid connects the Parilia with the birth of Rome by suggesting, among other options, that the fire of the Parilia is like the fire burning Troy that Aeneas escaped.

5. Rome celebrates with free museum admissions and a procession with actors! There is gorgeous gallery with Getty Images that you can view here!