History of the Roman Forum Posted by andregurgel on Mar 22, 2019 in Intro to Latin Course, Latin Language, Roman culture

Note: This blog post is a companion to Unit V of our Introduction to Latin Vocabulary course. You can learn more about the course here.

Some people don’t think the Greeks and Romans have anything to teach us. On the other hand, I never get tired of telling them that there is still a lot of the Ancient World in Western civilization. You don’t believe me? Well, just pay a visit to your local courtroom! 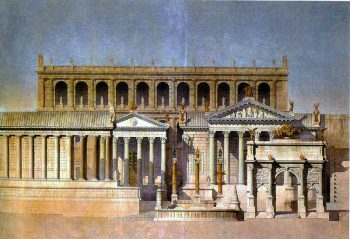 That’s right! The first thing you will probably see is a blindfolded woman holding a scale and a sword. That’s the goddess Themis, or Iustitia among the Romans. Why is she blind? Because justice is impartial (or at least it should be). As for those scales? They symbolize order or the weighing of the evidence. Last but not least, the sword means that justice must be respected and it often uses force (not excessive, of course) to punish.

The structure of our modern forums (or ‘fora’, according to the Latin plural) is heavily based on Roman architecture. Although many law schools couldn’t care less about Latin, Roman Law has greatly influenced all the modern Western legal systems to a greater or lesser degree. That’s why there are many Latin terms in law. Most lawyers that I know are not particularly interested in Latin but they will know what I mean if I quote vigilantibus non dormientibus iura subveniunt (the law serves the vigilant, not those who sleep) or if I say da mihi factum, dabo tibi ius (give me the facts and I will give you the law).

Although the word forum has been linked to law, all kinds of things happened in the Roman forum a couple of thousands of years ago. From great public speeches by Cicero and Cato the Elder to chariot races and gladiatorial games, the forum was the center of life in Ancient Rome and the people would often gather around the forum for commercial, political and religion reasons. Now let’s see how the forum evolved throughout Roman history.

The Roman Forum during the Time of the Roman Kings 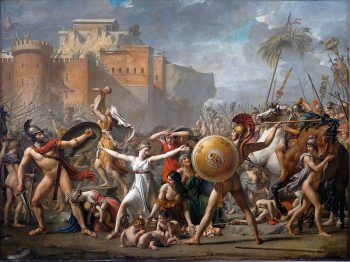 The Roman Forum is one of the oldest monuments in Rome dating back to the Roman kings. Sadly for us, a lot of historical data was lost when the Gauls led by Brennus sacked Rome in the fourth century BCE. Therefore, much of what we know from that period is considered semi-legendary.

According to history, the area in which the forum was built was originally a swamp which was drained during the rule of king Tarquinius to build the cloaca maxima, one of the first sewage systems in western recorded history. That area was also the place where the Romans first made an alliance with an Italic people called the Sabines. That episode became known as the Rape of the Sabines (keep in mind that ‘rape’ here is in the sense of ‘kidnapping’). The Romans had tricked Sabine men and kidnapped their wives. When their husbands waged war against Rome, the women’s intervention was such that the Romans and Sabines made a truce and the two armies met in a place near the forum which became known as the comitium in later times.

During the period of the kings, many structures were built near the forum. Numa Pompilius, the second king of Rome, built the temple of Vesta which remained somehow intact until 1549 when it was completely demolished. This same king also built the Regia, the first palace of Rome, but, sadly, if you go to Rome, you can only see the foundations of this ancient building.

The Forum During the Time of the Republic 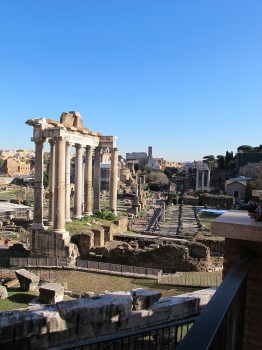 Remains of the Temple of Saturn. License: CC BY SA 3.0. Picture by Sailko. Link:

During the period of the Republic, the Senate bought private homes around the forum and expanded the area around the forum. Among the new constructions, we can mention the Temple of Saturn. The building of the temple started under the Roman kings with Tarquinius Superbus, but its inauguration took place under the Republic. For many centuries, the Romans kept the aerarium (public treasury) and the state archives in the Temple of Saturn. The temple was partially preserved and you can still read the following inscription: senatus populusque Romanus incendio consumptum restituit (the Senate and the people of Rome restored (the temple) consumed by fire). Among other temples which were built during this period, we can mention the temple dedicated to the twin brothers Castor and Pollux, originally Greek heroes known as dioskouroi (sons of Zeus) in Ancient Greek. Legend says that the twins took the shape of Roman knights and miraculously aided the Romans when they were being attacked by Tarquinius Superbus, the last Roman king, who wanted revenge for having been driven into exile by his own subjects. A similar story about divine twin horsemen is found in the Hindu heroes Nakulah and Sahadeva in the Hindu epic Mahabharata.

The more the empire grew, the more the Romans built more constructions around the forum. Another well-known construction was the Tullianum. No one knows why it received this name, but it is probably a reference to the Roman king Tullius Hostilius. This prison became famous for receiving many important people as “guests”. The traitor Sejanus, chief of the praetorian guard and confidant of the emperor Tiberius, was imprisoned in the Tullianum. Another famous prisoner was Vercingetorix, leader of the Gauls who fought Julius Caesar but was defeated at the Battle of Alesia. Last but not least, the apostles Peter and Paul spent some time in the Tullianum as well.

The Forum during the Time of the Empire

When the second civil war ended, Rome became an empire and the first emperor, Augustus, built a temple dedicated to his adoptive father, the famous general and writer Julius Caesar. Yes! A man could become a god back then. That was called deification and was very common among the Romans. Augustus himself became a god later and so did his wife Livia and, many decades later, the emperor Claudius (I strongly recommend the novel ‘Claudius, the God’, by Robert Graves). If you go to Rome, you can still see the remains of this once majestic Roman temple. Among other famous buildings from that period, we can mention the arch of the emperor Septimius Severus, which was built to commemorate his victory against the Parthians in modern-day Iraq. Luckily for us, this one has been partially preserved, so you can take a look at it and see the Latin inscription on it.

Over four million people visit Rome every year and they think that these buildings around the Roman Forum are nothing but ruins. Nothing but ruins? Maybe in the physical sense, they are, but for a classics enthusiast, the Roman spirit still lives on! Just to give you an idea, the Romans conquered many regions of modern-day Great Britain and, when the Roman Empire fell, only the ruins were left. On the other hand, an anonymous Anglo-Saxon poet could feel that those ruins meant something else, and he even wrote a poem called ‘The Ruin’ in which he longs for the days of yore and evokes the former glory of Rome. There was a common legend that Britain was once inhabited by giants, as the Anglo-Saxons thought that only huge people would be able to build such magnificent temples and villas. Sadly, that technology had been lost for them!

I conclude this article with the work of this Anglo-Saxon poet whose name, sadly for us, has been forgotten by history:

This masonry is wondrous; fates broke it.

courtyard pavements were smashed; the work of giants is decaying.

the frosty gate with frost on cement is ravaged,

Da mihi factum, dabo tibi ius – Give me the facts and I will give you the law.

Senatus populusque Romanus incendio consumptum restituit. – The Senate and the people of Rome restored (the temple) consumed by fire.