Ex-Slaves in Ancient Rome Posted by jamie on Mar 26, 2019 in Intro to Latin Course, Roman culture

Note: This blog post is a companion to Unit XV of our Introduction to Latin Vocabulary course. You can learn more about the course here.

Slavery wasn’t a permanent condition in Ancient Rome. A person born, sold, or captured into slavery had a chance—depending on how kind their master was feeling—of being set free. Many freedmen rose to extraordinary heights of power and wealth, but Roman society ensured that they, and their descendants, would remain marked by their time as slaves.

The most immediate means of freedom for a Roman slave was to run away. There were many types of slaves, and for many of them it would have been theoretically easy to escape their masters. Highly-skilled slaves, like tutors and accountants, lived practically as members of the master’s family, and even more lower-status slaves, like farmhands, would not have been shackled most of the time. Escape would have been simply a matter of walking away.

Staying free, however, would not have been so simple. An escaped slave would have lacked money, connections, and means of transportation. If they were foreign-born—and thanks to Rome’s constant overseas wars, many slaves were—they would have spoken Latin with a suspicious accent. Laws forbade citizens to help runaways, and professional slavecatchers would have been immediately sent after them.

Captured runaways (called in Latin fugitivi) were treated brutally. They were beaten and whipped upon their return to their master. The letters FUG (for fugitivus) were burned into their foreheads with a hot iron, leaving them with a permanent mark. Some had humiliating collars permanently locked around their throats. 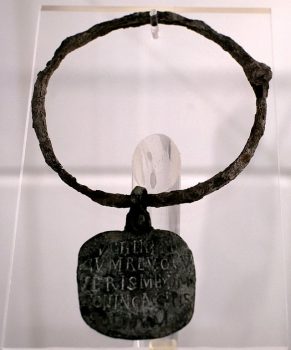 The most successful escapes were those in which slaves escaped en masse, rising up and killing their masters. On three occasions, called the Servile Wars, these uprisings turned into full-scale rebellions against the Roman state. None succeeded, however: the Roman army eventually defeated each rebellion, and the captives were either crucified or made to fight to the death as gladiators.

The only legal means of becoming a freedman (libertus) was through manumissio, which literally means ‘release from the hand’. There were three kinds of manumissio: per censum, per testamentum, and per vindictam. In manumissio per censum a master simply registered his soon-to-be-ex-slave as a citizen in the census. Manumissio per testamentum meant freeing a slave in one’s will. Manumissio per vindictam, however, was the simplest and most direct form. A vindicta was a small staff with which a master would touch the head of his slave: at the instant the vindicta touched him, the slave became free.

Upon being set free, the former slave would put on a cone-shaped felt hat called the pileus, which showed that he was no longer a slave, but a libertus. 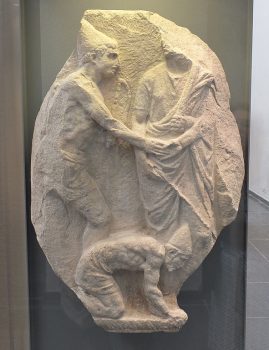 You can see the liberti at left and bottom wearing the pileus, and the vindicta in the hand of the former master to the right. Image by user Ad Meskens from Wikimedia Commons, licensed under CC-BY-SA-4.0

Freeing slaves was surprisingly common in Ancient Rome, so much so that laws were eventually passed limiting how many slaves a master could free and how old a slave could be when freed.

No doubt manumissio was one of the happiest moments in a libertus’ life. He did not, however, become completely free. He went from being a slave with a master to a cliens with a patronus. Even his name marked him: upon being manumitted, a libertus added his former master’s full name to his own, with an additional letter at the end of the name—L., for libertus.

Liberti (or libertini, which was the name for freedmen as a group) could own property and vote, although they couldn’t run for office. Highly-skilled liberti, like those who could read and write and work with numbers, had the opportunity at last to make money for themselves with their talents, and many did. Patrician Romans looked down on these new-money liberti and made fun of them for their lack of class. A popular ancient novel, the Satyricon, features a party at the house of an enormously rich and disgustingly crass libertus named Trimalchio, who’s building himself a gigantic tomb and serves his guests course after course of bizarre, over-the-top food.

At least some of the mockery of liberti was based in fear. Freedmen who worked for the emperor were vastly more powerful than any senator. One, Tiberius Claudius Narcissus, was the freedman and secretary of the emperor Claudius, and he was believed to have arranged marriages, appointed generals, and ordered assassinations for the imperial family.

The tomb of Quintus Calvio Turpio, freedman of Quintus. The inscription indicates that Turpio became a priest of Augustus, and that the tomb was made by Turpio’s own freedmen. You can see the word liberti, spelled LIBERTEI, in the last line. Image by user Romainbehar on Wikimedia Commons, licensed under CC-Zero

All the legal limitations on libertini were lifted for their children, who were considered full citizens. But a stigma remained. The poet Horace mentions that the majority of freedmen’s sons were ashamed of their family history. Horace, however, proudly says that he himself has no shame about his freedman father, and his father’s status didn’t end up holding him back. Horace rose to become one of the most famous and admired writers of his day.

Ancient Rome was an extremely rigid society, and it was almost impossible to move up in the world if you were born low. There were some lucky examples, as you’ve seen here, but these are the extreme outliers. Most slaves died in slavery, and most liberti never became rich.

One curious fact about Ancient Rome (and the ancient world in general) is that, despite the large numbers of liberti and the knowledge that slavery was an awful thing to endure, there was never even a hint of an abolitionist movement. Nobody wanted to be a slave, but nobody wanted to end slavery either. Why do you think that was?