The Top Ten Scandalous Women of Ancient Rome:Part I Posted by Brittany Britanniae on Aug 7, 2013 in Roman culture

Ancient Rome was quite a scandalous time. While, we can not believe everything that is written in ancient sources; one must admit there are certainly some astonishing tales. So this month, this blog will be taking a look at some of the most infamous, malicious, scheming women from Ancient Rome. 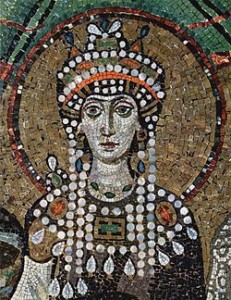 Theodora, detail of a Byzantine mosaic in the Basilica of San Vitale, Ravenna

Prime Examples: She became a prostitute out of necessity(to support her family), but pursued the scandalous lifestyle even when she left her family. In the Secret History, she was recorded for her indecent exposure, theatrics, sexual services off the stage, and even her lecherous portrayal of “Leda and the Swan.” Emperor Justinian I, so enamored with her, repealed the law that government officials could not marry actresses in order to marry her and even treated her illegitimate daughter and grandson as legitimate children.

Ergo:  Theodora places 10th on our list due to her “low” beginnings, although she only began working as a prostitute and “actress” to support her orphaned sibling and herself. History regards Theodora as a great empress of Rome, who was strong, courageous, intelligent, and decisive(i.e: she saved Justinian’s throne in the Nika Riots and was firm in religious policy even if it opposed Justinian). History does not implicate that she was an plotting woman, but it is not difficult to discern that a former “actress” could seduce the emperor, persuade him to change laws to marry her, make her queen, and give her power to rule. Click here to read more of her life story. 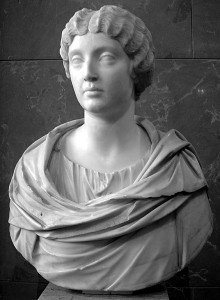 Prime Examples: Although Faustina the Younger was given various titles of honor such as Augusta and Mater Castorum (Mother of the Camp), she has also been recorded as a woman of shameful lust and murder. Cassius Dio records that Faustina, wife of Emperor Marcus Aurelius, ordered the deaths of several people by poisoning or execution and he claims that she had affairs with sailors, gladiators, and even soldiers (This give the title Mater Castorum a new meaning). She , also, was accused of inciting a revolution between her husband and Avidius Cassius.

Ergo:  Due to her promiscuity and willingness to kill for power, Faustina has made this list of infamous and devious women. However, the sources on her infamy and scandal are somewhat uncertain and this is why she is in 9th place.  You can read more here. 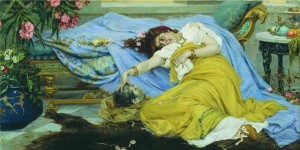 Fulvia with the Head of Cicero by Pavel Svedomsky.

Prime Examples:  Fulvia used marriage to acquire power.  She acquired the loyalties of a gang or collegium from her first husband, money from her second, and she did not survive her third husband; Marc Antony. According to Plutarch, she was a mass manipulator who was responsible for rendering Marc Antony easily controllable by women (Now, we know who Cleopatra should thank!). Furthermore,  Dio reports that she pierced the tongue of the decapitated head of Cicero out of disdain. Also, in Appian’s Civil War, Fulvia’s  jealous supposedly fueled the tension between Lucius and Octavian against Antony thus sparking the Perusine War.

Ergo: Fulvia earns the 8th spot in this countdown for her immoral actions all for the sake of power.  Even though a highborn woman, she went through husbands as a gold-digger, allowed her jealous to fuel a war, performed wanton violence against a dead man’s head, and manipulated all those around her for power.  You can read more on her here.

Lucrezia in a fresco by Pinturicchio. c. 1494

HONORABLE MENTION OF THE WEEK

Prime Examples: As seen within Showtime’s Borgia, Lucrezia was a pawn within her family’s politics and social climbing. She was daughter of the Pope Alexander VI and was married off to any man that would ameliorate their family. It also rumored that she had incestuous relations with her brother. More of Lucrezia’s life can be read here.

Ergo: Although Lucrezia is not ancient, she encompasses the idea: “Don’t Mess with Roman Women” (Albeit, the Borgias are from Spain; Lucrezia was born near Rome.), because Rome seems to breeds murderous women who use seduction, poison, and their cunning wit to achieve power.

Next week we will be looking at #5-7; who do you think made that list?