Counties in the Mix Posted by Bjørn A. Bojesen on Feb 28, 2020 in Uncategorized

Heisann og hoppsann!1”Heisann og hoppsann!” is a kind of nonsense greeting to get somebody’s attention in a ”fresh” way. It might be comparable to ”howdy!” or ”yo!” (in a rap song), but it’s maybe a little bit more childish. The Xmas song Musevisa contains the lyrics ”Heisann og hoppsann og fallerallera!” The words don’t really ”mean” anything, but ”hei” without the ending is hi; ”hopp” is jump; ”falle” is to fall. When Norwegians woke up after this year’s nyttårsfeiring (New Year celebrations), the map of the country had changed. (No, it wasn’t because of a collective champagne bakrus – hangover…) In the beginning of 2020, the number of Norwegian fylker (”counties”) officially went from 18 to 11, and a lot of people suddenly found themselves in a new political reality. Here’s an update for all readers. 🙂

Norske menn i hus og hytte… (Norwegian men in house and cabin…) So goes a famous line of Ja, vi elsker, the Norwegian national anthem. (Yes, the name of that song indeed means ”Yes we love”!) Of course, very few Norwegians – men or women –actually live hele året (the whole year) in their hytter… Most live in a hus in a bygd (”village”) or by (town, city), in a kommune [comMOONeh] (municipality), in a fylke… 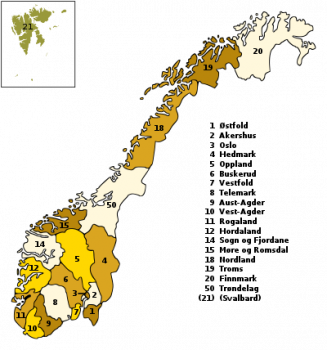 (If you check Kari’s old article about Norwegian counties, you’ll see that Trøndelag used to be split in a Northern (Nord-) and a Southern (Sør-) part – they were joined in 2018, making the number of fylker drop from 19 to 18.)

And whoa! here’s a map of the great New Year makeover: 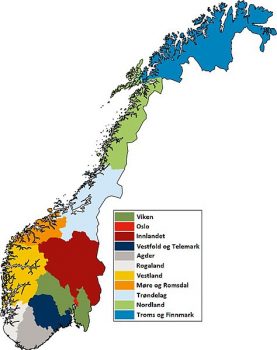 Can you spot sammenslåingene (the ”mergers”)?

Of course, it always takes some time to get used to a forandring (change), and as far as I can understand it from people and media in Norway, reactions to the new (and bigger) fylker have been mixed. One thing that bothers me personally is the name Vestland, because it is almost identical to Vestlandet – the larger region of Western Norway! 🙂

On the other hand, I love the name Viken, which has roots in the Viking Age. According to one explanation I heard, the word viking itself originally meant a pirate who was hiding in a … vik with his ship, ready to attack!