The Tomato and the Onion Posted by Bjørn A. Bojesen on Jan 31, 2020 in Uncategorized 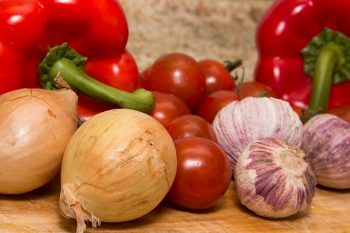 Children’s books and songs can be of great value when learning a foreign language – even if you’re a grown-up. 😉 Because phrases in children’s texts are normally short and to-the-point, you’ll understand them fast enough and easily gain the confidence (and curiosity) to learn more. Below follows a small breakdown of a classic Norwegian children’s poem.

Tomaten og løken (The tomato and the onion) was written by poet Inger Hagerup. Since it first appeared in 19741in the book Lille Persille, lots of Norwegian skolebarn (school children) have had to read it. You can hear it here, read with a clear and beautiful Sogn accent (Western Norway).

I’ll quote sections2In most of the world it’s legal to quote from poetry; the problem with shorter poems is, of course, that a single quote might be the entire text; to avoid that problem I split it up into several chunks of quote. with comments below:

”The tomato is hanging in the sun”. Note that solen would rather be sola in more modern Norwegian. As you can maybe guess, henger simply means hangs (the -ing form would be hengende, but such forms are normally only used as a kind of adjective: de hengende hagene = the hanging gardens).

Stappfull is stronger than just full! 🙂

”I make big and small ones happy.”

The verb å glede means ”to please” or ”to make happy”.

”But the onion is lying in the cellar, mutely pondering its riddle:”

In Norwegian, adverbs from adjectives most often get the ending -t, that’s how stum (mute) becomes stumt (mutely).

”What can be wrong with me who just”

i veien med literally means in the way with, but is a fixed expression about something being wrong with something.