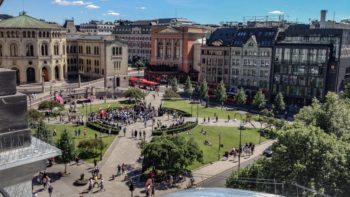 Today Norwegians elect their reps for Stortinget – the yellow parliament building to the left – in Oslo. (Photo by Gunnar Ridderström on Unsplash; no copyright.)

It’s election time in Norway! Today, all Norwegian citizens get the chance to vote for their favourite parti [parTEE] and help decide who’ll be the country’s next PM (in Norwegian: statsminister, ”minister of the state”): Will Erna Solberg stay in power or will folk (people) pick somebody else?

My predecessor Kari already described how makt (power) is shared in Norway, so I’ll stick to the basics here:

• den norske kongen (the Norwegian king) Harald doesn’t really have anything to say politically – he’s more like a symbolic ”father-of-the-nation” figure1This is called a constitutional monarchy. It’s comparable to the situation in the UK, where Queen Elizabeth is on all the coins but does not decide the politics.

• the Norwegian parliament is called The Great Thing, Stortinget, consisting of 169 representanter (delegates) from all over the country

• hvert fjerde år (every fourth year) there is a general election – stortingsvalg. If a party – or an alliance of parties – gets more than 50% of the 169 seats, they can then create a flertallsregjering (majority government). Otherwise, a mindretallsregjering (minority gov’t) will have to do the trick 🙂

In many countries, there is a struggle between two major political ”blocks” (think Trump vs Biden in the US), and Norway also has this tendency. For years after WW2, the country was totally dominated by the ”left wing”2These words must be understood in a European context. 🙂 I know that some Americans used to think that European countries were all ”communists” – Norwegian governments have never been that extreme! Both ”left” and ”right” parties in Norway have a tendency to gravitate towards the centre, and in reality the difference between AP and Høyre is not that big, or so I’m told! 🙂 Arbeiderpartiet (Workers’ Party = Social Democrats). Maybe you’ve heard about the famous female PM from that party, Gro Harlem Brundtland? At some point, ”right wing” governments, dominated by the party Høyre (Right), entered the chat. And although Stortinget nowadays has reps from 9 different partier, people still talk about

So, that’s 5 parties. 🙂 The remaining 4 are considered sentrum (centre) parties, who may join a government on either ”side”3There are shades here, for example KrF is more ”rightwing” than Sp, but let’s keep it simple for now! 🙂: Senterpartiet, Venstre, Miljøpartiet De Grønne, Kristelig Folkeparti.

When I spent time in Norway last month, nyhetene (the news) were totally dominated by valget. PM Erna Solberg from Høyre was touring the country trying to convince Norwegians not to vote for her competitor, Jonas Gahr Støre from Arbeiderpartiet. I dette valget er det også en tredje statsministerkandidat (in these elections there even is a third PM candidate): Trygve Slagsvold Vedum from the pro-farmer party Senterpartiet.

How much should the districts decide? How many immigrants should Norway welcome? What should the relationship between Norway and the EU be like? Those are some of the traditional viktige saker (important topics) for many velgere (voters). This year, klima (climate) seems to be a very hot topic in the debates. Norge is one of the world’s richest countries, but a lot of the wealth comes from the sale of olje [olyeh] (oil), which isn’t exactly grønn (green), so what to do…

Valglokalene stenger klokka 21 i dag. (The polling stations close at 9 PM today.) Tomorrow we’ll maybe know who’ll be in charge of the beautiful country of Norway for the next 4 years! 🙂