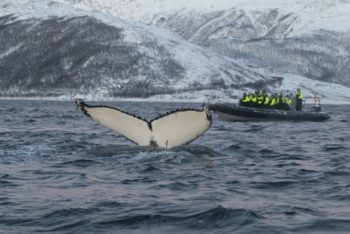 Hale-n til hval-en. (The tail of the whale.) In Norwegian, adding endings to nouns is even more important than in English. (Illustrative photo by Simon Infanger on Unsplash; no copyright.)

One of the funny things about Norwegian is that you can’t avoid adding endings to words. Well, of course English learners also sometimes struggle with that – how do you add a plural -s to box? But generally, as long as you know how to add an -s1and a few other endings, such as -ed and -ing (verbs) and -ly (adverbs from adjectives) to words, you don’t have to care a lot about endings in English. Norwegian is more complex, mainly for one reason, which I’m sure is the first thing you learnt: The is an ending! So, let’s repeat – instead of saying ”the city (by)”, Norwegians say ”city-the” (by-en).

The main challenge is knowing which word takes which ending.

• Singular the varies according to the noun’s gender – you have to know whether the word you’re about to use is masculine (the = -en), feminine (-a) or neuter (-et).

hunder, skoger, katten, systemet (dogs, forests, the cat, the system). But what about words that end in an -e2A short, unaccented -e that is! 🙂?

You of course don’t say ”jentea” or ”menneskeer”. You remove the -e, then add the ending: jenta, mennesker.

Although I’m focusing on nouns here, the rule about -e removal is used also when you’re adding endings to verbs: å danse, ”to dance”, becomes danset, ”danced” (dansa in some varieties of Norwegian).

The plural the is -ene.3this can also be analysed as -ne (with an -e- added to ease pronunciation) This ending replaces the -er ending: hunder > hundene (the dogs), fjell > fjellene (the mountains), bøker4an irregular plural – the singular is bok. > bøkene (the books).

And oh! Nouns that already end in -er in the singular behave slightly differently… These are words that very often denote professions or nationalities (= persons): baker, ridder, tysker (baker, knight, German). Instead of doubling and saying things like ”bakerer”, the final -r is dropped in the plural: bakere, riddere, tyskere. And for the plural the, just add -ne to the basic word: bakerne, ridderne, tyskerne. That’s it!