Surviving the Sunless Season Posted by Bjørn A. Bojesen on Nov 30, 2021 in Nature, Travel & Geography 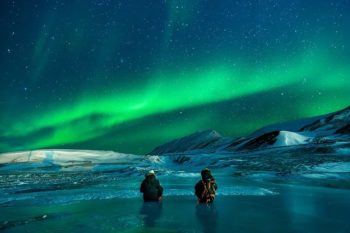 (Photo courtesy of Noel Bauza from Pixabay; no copyright.)

North of the Arctic Circle, there’s no sunrise in the winter sky. But do Northern Norwegians really live in total darkness? I asked Bjørn Farbu – a doctor until recently residing in Harstad1He currently lives in Trondheim with his family. – about life in mørketida (the dark season).

What brought you to Nord-Norge (Northern Norway)?

My girlfriend is from Tromsø. We met in Trondheim and lived there for several years before moving to Harstad, a small town south of Tromsø. I already had an appreciation for fjellene og naturen i Nord-Norge (the mountains and the nature). Furthermore, the inhabitants are veldig åpne, imøtekommende og fine folk (very open, kind and fine people). We had to go somewhere for our medical internship2in order to become licensed doctors, and Northern Norway was an easy choice.

When does mørketida start and end?

How was your first encounter with mørketida?

The first surprise was that it wasn’t entirely dark. Mørketida only means that sola er under horisonten (the sun is below the horizon). This means that here may be some dagslys (daylight) at noon. If you’re på jobb (at work) around then, forskjellen mellom Sør-Norge og Nord-Norge (the difference between Southern and Northern Norway) isn’t that large. Det er mørkt (it’s dark) both when you go to work and when you leave. But during the darkest period in Tromsø, it never gets brighter than skumring (dusk or twilight) at noon. One is struck by alt det fantastiske lyset (all the fantastic light)! På morgenen er det rødtoner og oransje som dominerer, mens midt på dagen kan det være et krystallklart blått lys. (Mornings are dominated by hues of red and orange, while the light may be a crystal clear blue at noon.)

How do people cope without sunlight for so long – don’t they get depressed?

Nordlendinger (”Northerners”) are very good at accepting that you’re trøtt og vil ligge på sofaen (tired and want to lie on the couch) in December. Og energien kommer tilbake mange ganger med sola, ikke minst når det er midnattssol. (And the energy will return many times with the sun, especially during Midnight Sun.) … I don’t think nordlendinger are moodier at all during winter than folk fra sør (people from the south [of Norway]).

How does it feel when the sun finally returns?

Last jul (Christmas) I celebrated with my svigerfamilie (in-laws) in Tromsø. A friend convinced me to join in for a joggetur (jog) of 2 mil [meel] (20 km) – in the middle of the night! It was calm, minus 10 degrees3of Celsius, and clear weather. We did bring a hodelykt (headlight), but månen og nordlyset (the moon and the northern lights) eliminated any need for kunstig lys (artificial light). En fantastisk tur!

What is your recommendation for tourists to Northern Norway – summer and midnight sun or winter and northern lights?

I’d recommend turister to go both in summer and winter! Sommernatta med sol og yrende fugleliv (the summer night with its sun and bustling bird life), and you don’t go to bed, is uforglemmelig (unforgettable). The contrast you’ll get in January.