Norwegian Plurals are your friends Posted by Bjørn A. Bojesen on Oct 16, 2015 in Uncategorized 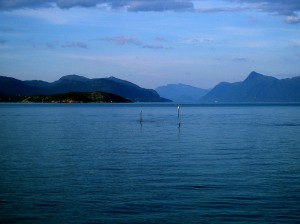 1 fjell, 2 fjell… (Photo courtesy of Stian Rødven Eide at Flickr, CC License. Shot from the ferry between Halsa and Kanestraum.)

In Norwegian, as in English, some ord [ore] (words) have surprise plurals…

As you can see, except liten, all of these words are nouns. (Unlike English or German verbs, Norwegian verbs are not inflected – lucky you!) To pluralize an adjective, you normally just add an -e:
glad fot – glade føtter (happy foot – happy feets)

An exception to this rule is the word blå (blue), which you may use without the -e: blå(e) bøker (blue books)

That leaves us with nouns, and you’ve got flaks (luck) again! 🙂
Most nouns – and here we are talking Bokmål Norwegian – simply add the ending -er:

Of course, when a noun already ends in -e, the two endings are merged. (Menneskeer would sound kind of awkward, wouldn’t it?)
menneske – mennesker (human/s)
tante – tanter (aunt/s)

For sonic reasons, some words are shortened a bit when the -er is added (”syncope” is the expert term for this):
onkel – onkler (uncle/s)
sykkel – sykler (bike/s)

Wait – shoudn’t the plural of ord (word), then, as I mentioned atop, be ”ord-er”? Absolutely not! 🙂
Due to an Old Norse quirk, lots of neuter nouns (those that are dating the article et rather than en or ei), don’t change at all in the plural! It’s exactly like a sheep – twelve million sheep in English – except there are more of them in Norwegian!
fjell – fjell (mountain/s)
hus – hus (house/s)
barn – barn (child/ren)

The definite plural (the ”the” form) of Norwegian nouns is super easy – the ending to add is –ene:
byene (the towns), tantene (the aunts), syklene (the bikes)

However, once again the nouns already ending in -er (in the singular) are making trouble:
japanerne (the Japanese), fiskerne (the fishermen)

And the real problem child is the word … barn. Due to influence from the dialects (and from Nynorsk Norwegian), only few Norwegians write or say barnene for ’the children’ (although it’s perfectly accepted Norwegian). If you want to fit in, say barna.