Norwegians Speak Dialects Posted by Bjørn A. Bojesen on Mar 15, 2015 in Language 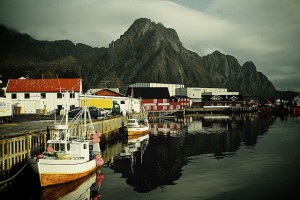 ”I don’t understand people who speak Nynorsk Norwegian, why can’t they just switch to Bokmål Norwegian?” Now and then, readers ask such things. I’ve written about the nynorsk/bokmål split before. Of course, it may still be confusing for new learners of Norwegian. So, I’d like to set the record straight as simply as I can:

In other words, nobody really ”speaks” Nynorsk or Bokmål! 🙂

They’re just two different ways of putting down what Norwegians say and think in writing. Think about someone from Yorkshire who’s speaking a traditional Yorkshire dialect of English. When writing an e-mail, she’ll probably write it in Standard English. The same thing happens in Norway, except that everybody speaks a dialect and has two choose between two ”Standard Norwegians” when firing off that e-mail!

Admitted, some Norwegian dialects – especially in Bergen and in the Oslo area – are very close to written bokmål, so some people will say that they do ”speak Bokmål”, even if that is not entirely accurate. And some nyhetsopplesere (news presenters) and skuespillere (actors) do ”speak Nynorsk” in their jobs – but switch to dialect when they get back home. (Just like people at the BBC maybe don’t speak BBC English with their families…)

As I’ve shown you before, Bokmål and Nynorsk are quite close to each other – after all, they both represent Norwegian! (Just think about how Americans write color while Britons write colour.) The differences boil down to a handful of token words such as jeg vs. eg for ’I’, as well as some variations in vowels and inflections:

Bokmål: Jeg liker ikke eplebiter i grøten. (I don’t like pieces of apple in the [my] porridge.)

Every Norwegian has to learn both ways of writing in school. 8 % of the people enrolled in the Norwegian army in 2014 said nynorsk was their main målform (”language variety”), so bokmål is clearly dominant. Still, many people speak a dialect that’s closer to nynorsk. To these people, bokmål feels a bit foreign, while nynorsk feels a bit closer to the heart. In social media such as Facebook, many Norwegians avoid the ”language conflict” entirely, trying to write in their local dialect instead!

Many Norwegian kommuner (municipalities, ”townships”) have chosen an official målform, while some are ”neutral”. This map should tell you why many people associate nynorsk with Vestlandet (Western Norway):

Why are there two ”Standard Norwegians”?

In 1814, Norway left a political union with Denmark (only to enter a new union with Sweden). For four centuries, Norway had been ruled by Danish kings. Old Norwegian (which was almost identical to Icelandic) had died out as a written language, and people were writing their documents in Danish instead. The hunt for a new Norwegian writing system began…

• Knud Knudsen wanted to write Norwegian as spoken (by the upper clases) in cities like Oslo, where the dialects had been most exposed to Danish. This led to the (gradual) creation of bokmål. (And now you know why Danish looks so similar to Norwegian!)

• Ivar Aasen wanted to write Norwegian as spoken (by farmers, fishermen…) in the rural districts. He travelled around in the countryside, collecting words and expressions from many dialects who had been less influenced by Danish. From this cocktail he created nynorsk.