Is Norwegian a Happiness Drug? Posted by Bjørn A. Bojesen on Feb 27, 2021 in Language, Nature 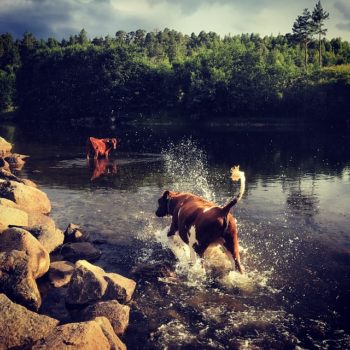 Blir du glad av å snakke norsk? (Does speaking Norwegian make you happy?) Although linguists don’t seem to agree to which degree the language we speak might shape our perception of verden (the world)1This is also known as the Sapir–Whorf hypothesis., I’ve often heard comments like: ”Norwegians are always so friendly,” ”Norwegians just sound so happy when they talk,” and even: ”Is it even possible to be angry in Norwegian?” (of course it is, just go to the North and tell them they have no swear words!) Both Danes and Swedes2and Icelanders, it seems. seem to suffer from this stereotype of the super-optimistic Norwegian (who’s always skiing and smiling). So is there some truth to it?

A tonal language, Norwegian does sound very melodic to many people3Swedish has tones, too, but maybe Norwegian does sound more ”singsong” than Swedish, at least the Eastern Norwegian dialects near Oslo?. One could argue that the falling and rising tones nicely match the fjell og daler (mountains and valleys) of the country. (Some people from Eastern Europe, if I remember correctly, told me they felt Norwegian sounded like Elvish; a Ukrainian girl had been learning norsk just because of how she liked the sound of it.)

What do you think – er norsk et optimistisk språk? Er nordmenn optimister? (Is Norwegian an optimistic language? Are Norwegians optimists?)

Here are some ”happy bits” you can throw into your Norwegian conversations to let go of your national gloom:

A very Norwegian thing is to ”seal” your phrase with an echoing ”confirmation” word at the end – like the then in ”It’s a deal, then”. To my ears, at least, these small words create a very Norwegian, and perhaps also optimistic, vibe. 🙂