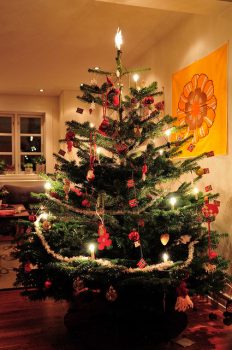 Visste du at juletreet i London er norsk? (Did you know that the Christmas tree in London is Norwegian?) Each year a høy julegran (tall Christmas spruce) gets a new home in the middle of the English capital. When its electrical lights are lit, and the whole tre (tree) is shining beautifully i den mørke natta (in the dark night), it’s a true sign that jula (Xmas) has arrived – ikke minst (not least) in the homeland of the proud tree…

Most Norwegian homes have a juletre during Christmas. It’s often standing in a hjørne (corner) of stua (the living-room), spreading a special sense of festivity. Of course, children can’t wait for gavene (the presents) to be placed below the tree on julaften (Christmas Eve, December 24th)! 🙂

Norwegian juletrær (-trees) are quite similar to the American ones that many kids watch in the Disney show ”Donald Duck og vennene hans” (Donald Duck and His Friends) on Xmas eve. People pynter juletreet med (decorate the Xmas tree with) pynt (decorations) like hjerter (hearts), stjerner (stars), glitter (tinsel), flagg (flags), lys (lights) and julekuler (Xmas globes – isn’t that a fun word?) Of course, as the song said, the tree should have a bright stjerne atop. On the other hand, you’ll have to look really hard in order to catch a glimpse of Snipp og Snapp (Chip and Dale) between grenene (the boughs)… 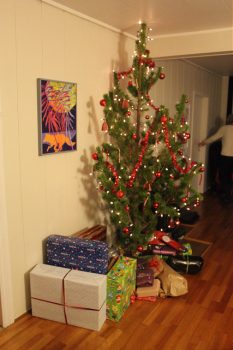 On Christmas Eve, the presents are placed below the tree… (Photo courtesy of Harald Groven at Flickr, CC BY-SA 2.0 License.)

In several places in Norway, it’s very easy to get a juletre: You just bring an øks (axe) to the nearest mountain skog (forest). Do check, however, which way the thumb of that local bonde (farmer) is pointing before you start chopping… Even places that look completely wild often have owners, and you don’t want to pay a bot (fine) just for a pretty tree, do you? Maybe for this reason most Norwegians buy their juletrær from pro sellers at a market.

Gran (spruce) originally wasn’t common in Vestlandet (Western Norway). For this reason, Western Norwegians sometimes have a furu (pine) instead. But the function of the juletre is just the same – å spre glede og julestemning. (to spread happiness and Xmas atmosphere).