Norwegian Egozones Posted by Bjørn A. Bojesen on Aug 30, 2014 in Uncategorized 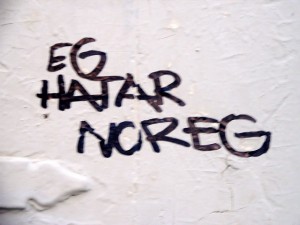 ”I hate Norway” written in nynorsk. Thanks to Aslak Raanes on Flickr. (”Must be irony,” as he writes.)

This is going to be the egoistical post. We all need to talk about ourselves now and then, so we need a word for ”I”. This is easy enough in written Norwegian – jeg (let’s stick to bokmål for the time being!) Jeg lærer norsk. (I’m learning Norwegian.)

If you’ve ever heard somebody saying jeg the way it’s written – ”yegh” – then you’ve probably met a Martian or something! The word for ”I” is pronounced in a dozen different ways, depending on the part of Norway you’re from. Even as a foreigner you have to ”choose your region”. Most people go for the Oslo variety, but I know people who’ve moved to other parts of Norway and tried to learn the local dialect instead.

Okay, this is a gross simplification, but if we leave out the niceties, one could say Norway has three major ”ego regions”: The places where people say jeg [yay], the places where they say eg [egh], and the places where you refer to yourself by letting out an æ [a]. Østlandet (Eastern Norway), in particular the Oslo area, are the strongholds of jeg, while Vestlandet (Western Norway) is the traditional eg sphere. Put crudely, the remaining parts of Norway – Sørlandet, Trøndelag and Nordnorge – go for æ.

(If you’ve been following this blog, you should know that there are two official ways to write Norwegian: bokmål – which is being taught here – and nynorsk. In nynorsk, ”I” is always eg. Most nynorsk users live in Western Norway. Hm… The poor æ-sayers, on the other hand, have no official support for their favourite pronoun!)

In real life things are a bit more complicated. For example, some østlendinger (Eastern Norwegians) say je [yeh]. Kjell Magne Bondevik, former Norwegian PM, called himself i [e!], as people in his hometown of Molde usually do.

So, if you’re tired of all the people around you that only say ”I – I – I…”, maybe you should go on an ego trip to Norway!

Try this at home!