5 most bizarre Norwegian dishes Posted by Bjørn A. Bojesen on Aug 31, 2014 in Uncategorized

An exotic country, Norway has got its share of rare dishes. Native Norwegians may not agree with me, but I think the most bizarre Norwegian dishes are the following: 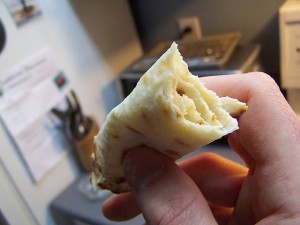 5. Lefser with brunost. A lefse is a Norwegian tortilla, only with hvetemel and potet (potato) instead of maize (corn). Wrap it around some brunost (Norwegian brown cheese), and you have a nice add-on to kaffien (the coffee). Why is this strange? Well, it depends on your smak (taste)! A few times, it tastes just too much of dusty flour and burnt caramel… Jamie Oliver thought brunost was noe søtt kliss (some sweet ”goo”). Many visitors absolutely adore it. 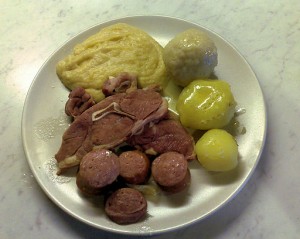 4. Komler. I’ve seen the eyes of Norwegians twinkle as they told me they were about to eat komler or raspeballer, as they’re also known. The English name for such white, spongy, round thingies is ”potato dumplings”. I never understood the charm of chewing hot balls of flour. Somewhere there’s supposed to be a tinge of potatoes.

3. Dravle. As a kid on his first visit to Norway I had a hard time digesting some spoonfuls of this traditional dessert. The Big Norwegian Encyclopedia tells us that dravle is usually made from milk that is being heated till it almost starts boiling, ”under tilsetning av surmelk og evt. halvpisket egg, slik at ostestoffet faller ut i hvite klumper” (during the addition of soured milk and eventually half-whipped eggs, so that the casein/”cheese stuff” emerges as white lumps). – I wasn’t able to find a free photo of dravle, but take a look here. 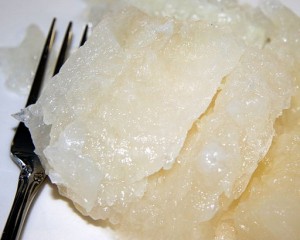 Lutefisk. By Jonathunder (Own work) [CC-BY-SA-3.0 (http://creativecommons.org/licenses/by-sa/3.0) or GFDL (http://www.gnu.org/copyleft/fdl.html)], via Wikimedia Commons

2. Lutefisk. You take a torsk (cod), dry it for some months until it becomes as stiff as parchment skin. Then you put your tørrfisk (dried fish) to soak for some days, steep it in lut (lye – a substance with a pH value similar to soap), before you let it soak in some more water. The result is a very watery delikatesse (delicacy), to say the least… 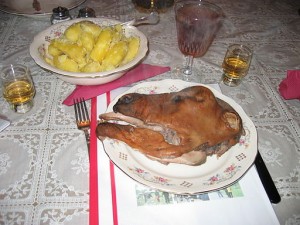 1. Smalahove. No doubt about this one. As if eating the hove (= hode, head) of a smale (= sau, sheep) wasn’t weird enough, smalahove afficionados in Western Norway even slurp the sheep’s little brain and big, empty eyes.
Tags: dumpling, fish, komle, milk, smalahove, strange