The Scotlands of Norway Posted by Bjørn A. Bojesen on Sep 27, 2014 in Norway and the world

Last week the people in Scotland voted no to becoming a country independent from the United Kingdom. For some people in faraway countries, it was maybe the first time they saw the Scottish flag or even heard about Scotland. I want to make sure that you, i det minste (at least), hear about the parts of Norway that aren’t typically Norwegian (even if they aren’t separate countries like Scotland):

– Sápmi (Saami) or Sameland (Norwegian) is the ”Saami Country”. Samene (the Saami people) probably came to Norway long before the Vikings. I gamle dager (in days of old) there were Saami living as far south as Sørnorge (Southern Norway). The Norwegians, however, gradually pushed them north. Today they are living in parts of Nordnorge (Northern Norway, mainly the fylker Finnmark, Troms, Nordland and a bit into Trøndelag). Many Saami have kept their ancient clothing, singing and herding traditions (reinsdyr! reindeer!), and even the language samisk (Saami), which is related to Finnish. They used to be discriminated by Norwegian officials, such as lærere (school teachers) who would brutally punish Saami schoolchildren who were caught speaking their own language. Today they’re of course (!) fully integrated into the Norwegian society and even have the right to wave little Saami flags on 17. mai, den norske grunnlovsdagen (the day of the Norwegian constitution). The Saami have their own parliament – Sametinget – in the Saami-speaking town of Karasjok. For two reasons, though, it’s very unlikely that there’ll ever be a vote on Saami independence: 1. The Saami live in four different states – Norway, Sweden, Finland and Russia. 2. The Saami live side by side with ”ordinary” Norwegians, and there are very few places where they are in the majority. 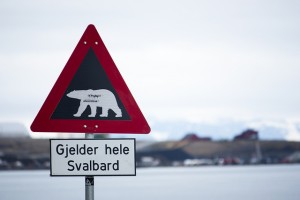 – Have you ever looked at Norway on a map, and then moved your eyes a bit further north? If so, you’ve probably noticed the group of islands called Svalbard. They’re part of Norway, but in a special way. A century ago the world’s powerful countries all wanted to share those cold øyer (islands) with isbjørnene (the polar bears). The international community finally (by the means of Svalbardtraktaten, the Svalbard Treaty of 1925) gave Norway the ”suverenitet” (souvereignty), which basically meant: ”Okay, guys, you can call those islands Norwegian and raise your pretty flags, but don’t get in the way of our businessmen, and don’t send your soldiers up there.” For many years the Soviet Union was mining for coal in Svalbard, where there still is a community of russere og ukrainere (Russians and Ukrainians). Unlike the rest of Norway, Svalbard is not a member of NATO, and it is not allowed to be its own fylke (”region”). Russland (Russia) and Norge occasionally disagree about the islands, but, as far as I know, things have been quiet for a long time. The most powerful person on Svalbard is sysselmannen, who’s a kind of supervisor and police officer who checks that the 2000-something inhabitants behave nicely. I don’t know how to translate sysselmann, but it’s a nice word! 🙂