Sweet Brother Jokes Posted by Bjørn A. Bojesen on Apr 30, 2015 in Norway and the world 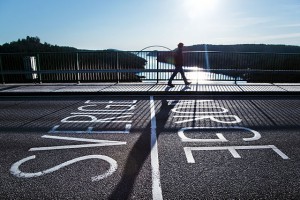 Svenskevitser (Swede-jokes) like that are quite popular in Norway. In fact, nordmenn (Norwegians) love joking about their Eastern neighbours so much that the comedy band Trøste & Bære reached the 4th spot of the 1990 Norwegian hit list with their song Jag är inte sjuk (Jag är bara svensk) (Swedish: I’m not ill (I’m just Swedish)). 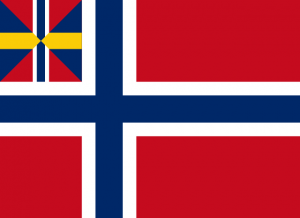 Norway’s flag during the union with Sweden. The union ”blotch” was jokingly called sildesalaten – the herring salad.

Why such an obsession with svensker? I’d guess it has something to do with history. While Sverige (Sweden) was busy being a European stormakt (Great Power), Norway was in a union with Denmark, which only ended in 1814, after about 400 years. As soon as the ties to Denmark were cut, Sweden became Norway’s dominant storebror (big brother) in a new union, which lasted until 1905, when Norway finally became fri som fuglen (free as a bird). Just look at Nobelprisen, which originated during the union (in 1895). Yes, Norway chooses the winner of fredsprisen (the peace prize), but all those fancy prizes of literature and chemistry and medicine and … are bestowed upon the world from no other place than Stockholm, the Swedish capital! Add the fact that there are about dobbelt så mange (twice as many) Swedes as Norwegians, and you’ve got a good reason to fight back with a dash of humour… 🙂 Funnily enough, Swedes also make jokes about Norwegians…

Outside of vitsene (the jokes), the relationship between Norwegians and Swedes is excellent. They share the same peninsula and forstår hverandres språk (understand each other’s languages – well, mostly, that is!) In fact, a Norwegian nickname for Sweden is söta bror, which means ”sweet brother” in ”Norwegian-Swedish” (in actual Swedish it would be söte bror, or so they told me!)

Because of oljen (the oil), Norway has somehow become Sweden’s rike lillebror (rich little brother). Lønningene (the wages) in Norway are much higher, and many Swedes have gone to Norway to work, often taking jobs that Norwegians themselves don’t care about (for example in hotels or kiosks). Norwegians, on the other hand, cross the border to go on harryhandel in Swedish towns like Strömstad. Harry- comes from the name Harry, which has become a negative expression in Norwegian. (”For en harry kjole!” means ”What a kitschy/unstylish/cheap dress!”) So, harryhandel is that kind of handel (shopping) where Norwegians go to Sweden just because alkohol, kjøtt (meat) and tobakk (tobacco) is so much cheaper there!