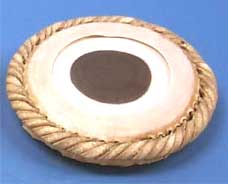 Tabla is the most famous percussion music instrument in Afghanistan. It is most commonly used in Afghanistan classical music (موسيقي), but its versatility in all musical styles (عبارتونو) has enabled it to become the most popular percussion instrument. The level of sophistication and tonal beauty (ښايست) it possesses has elevated the instrument to an unmatched status in the world of percussion. Tabla, a set of two drums, is the modern caretaker (غمخوري) of an ancient rhythmic tradition (دود او دستور) that is perhaps 5000 years old in a part of the world that is considered a birthplace (پيدايښ ځائي) of civilization.

The history of classical music in Afghanistan is considered to be at least 500 – (۵۰۰) years (کال) old as represented by a continuum of musicians passing the music down in the oral tradition. As one of the oldest musical traditions in the world (نړۍ), there are qualities that many feel bridge (پول) the gap from the divine aspect (اړخ) of the creation of sound itself to musical expression (څرگندۍ). Tabla were invented(پيدا کړه) in the first half of the 18th century (about 1738) by a drummer named Amir Khusru, who was instructed to develop a more subtle and melodic (خوږژبى) percussion instrument that could accompany the new style of music called Khayal. That style, with tabla accompaniment, is the basis of the modern performances (اداکول) of Afghanistan classical music.

The tabla is a set of two (دوه) drums that are played while sitting on the floor (ځمکه). The larger drum, called Bam (بم), was originally made from clay, but is now constructed of metal (bras, steel, or copper). The right-hand drum is called the Zeal (ذیل), and is made of a seasoned hard wood. Each drum has two layers of goatskin (پوستكې وزه) stretched across its top to provide a playing surface. The top layer is cut in a circle around the rim, and the bottom layer stretches across the entire drum. The most unique (بې سارې) aspect of tabla construction is the application of an iron and rice paste that is placed in a circle on top of the drum head. That black paste is called the Shyahi (سیاهی/ توری) and, once it is dried, it allows for sound possibilities that are not found on any other drum in the world.

Please see the video below. (in this video they explain some parts of Tabla in Hindi)