The Afghan Flag Posted by Sayed Naqibullah on Apr 25, 2013 in Basic, Uncategorized 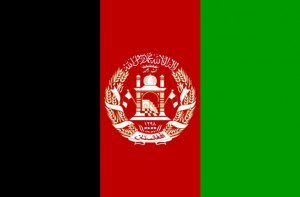 The color of the tree strips are interpreted as follow: The black strip means the ages of darkness when Afghanistan was not independent. The red stripe means fighting for independence and bloodshed that accord during all the years before achieving the independence. The last green strip means prosperity, and independence.