All eyes on John Paul II Posted by Kasia on Apr 27, 2014 in Famous people, History, Religion 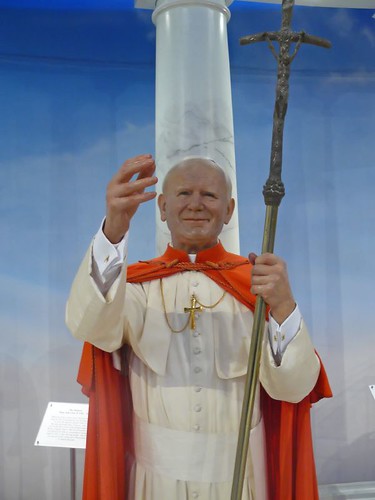 Image by mharrsch on flickr.com

Today was a very important day for all Poles! Important, touching and emotional:) Pope Francis canonized into sainthood two 20th Century popes at a Mass on Sunday celebrated before hundreds of thousands of people at the Vatican’s St. Peter’s Square, lauding his predecessors as “men of courage” (ludzie z odwagą).

The crowd roared when Pope Francis read the formal proclamation of sainthood for Saint John XXIII and Saint John Paul II. The event drew scores of global leaders as well as Pope Emeritus Benedict XVI, whose decision to step down last year made Francis the leader of the world’s 1.1 billion Roman Catholics.

“They lived through the tragic events of that century, but they were not overwhelmed by them,” Francis said of the newest saints. “For them, God was more powerful; faith was more powerful — faith in Jesus Christ the Redeemer of man and the Lord of history.”

Benedict had promised to remain “hidden from the world” after resigning last year, but Francis has coaxed him out of retirement and urged him to take part in the public life of the church. He sat with a group of cardinals next to the altar.

Pope John Paul II, the second-longest serving pope in history, led the church from 1978 until his death in 2005. A native of Poland, he was the first non-Italian since Pope Adrian VI, who died in 1523. Polish pilgrims carrying the red and white flags of John Paul’s homeland were visible everywhere in the square.

Pope John led the church from 1958 until his death in 1963. He is best known for ordering the Second Vatican Council, a liberalizing effort that actually completed its work two years after John was felled by cancer. He is credited with efforts to modernize the church that included allowing Mass to be celebrated in local languages instead of traditional Latin. Like John Paul, he also pressed for closer ties to other religions: This Council in 1965 issued a landmark document that called for Jewish-Catholic dialogue and rejected the ancient Christian stigma against Jews as killers of Jesus.

Pope John Paul II, who is still widely revered in his homeland, is credited as having played a major role in helping to weaken and then defeat the Communist regime in the late 1970s and 1980s. He proved to be an uniting force for Poles while at the same time successfully walking a thin diplomatic line between helping to bring down the system while helping to maintain peace and encouraging reconciliation in what proved to be a relatively bloodless revolution.

While internationally The Pope, as many Poles still refer to him, was well-known for the globetrotting exploits which made him the most accessible pope in history, at home he was loved for his warmth and the affection he continued to feel for his homeland right up until his death.