Beautiful May Holidays in Poland! Posted by Kasia on May 3, 2016 in Culture

In Poland, May begins with a series of important holidays. May 1st is International Labor Day (Święto Pracy), obviously very popular in our socialist years, and still an official day off. On May 2nd, we have Flag Day, when all flags should be up, if they weren’t for May 1st already. And on May 3rd, Constitution Day (Dzień Konstytucji). Displays of patriotism which are practically obligatory today were forbidden under socialist rule. Your flag had to be out on May 1st, or you would suffer repercussions (reperkusje), but if you dared to leave it up until May 3rd, you’d find yourself in much bigger trouble… 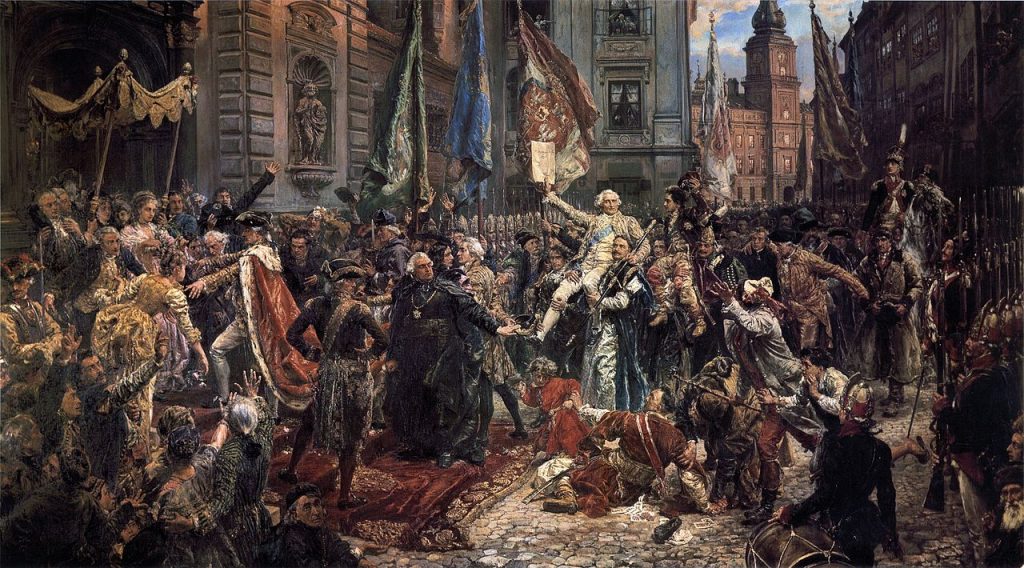 Adoption of the Polish Constitution of May 3, 1791. The painting depicts King Stanislaus Augustus together with members of the Grand Sejm and inhabitants of Warsaw entering St John’s Cathedral in order to swear in the new national constitution just after it had been adopted by the Grand Sejm in the Royal Castle visible in the background. Image credit https://en.wikipedia.org

So, what was this Constitution, why did it bother Russia so much, and why is it still so important?

Let’s go back a few centuries. Since 1385, Poland had been a sprawling empire often referred to as the Republic of Two Nations: The Crown and Lithuania. As the name itself suggests, it was a federal union between the two countries, precipitated among other things by a desire to strengthen the nations against the usual suspect: Russia.

The idea wasn’t bad, but almost four hundred years later, the union was not faring so well. In 1772, the edges of the Polish-Lithuanian Commonwealth were sliced away and divided between Russia, Prussia, and Austria. That was the first partition.

Partitions were a direct result of the country being weak and unable to perform the reforms necessary to strengthen its military position. Why was this so? Well, the Polish nobility have a history of being a stubborn band of anarchists, and the great number of privileges they enjoyed under the Commonwealth made ruling the country in a unified manner troublesome. Nobles had immunity. Nobles could not be taxed. Nobles could not be controlled. Nobles came and went as they pleased, attending meetings of the Sejm (the Polish version of Parliament) with the pleasant certainty that they had more executive power than the monarchy. The law even allowed them the right to rebel against the king if he should violate any of their privileges!

But worst of all was the deputy right of liberum veto, which allowed any noble in the Sejm to end the current session and nullify all legislations passed. All he had to do was shout out: “Nie pozwalam!” (I do not allow this!)

The veto was not entirely a bad thing; in fact, in origin, it had served to curb the powers of the (elective!) monarch and keep noble landowners in control of the country. It was also a crucial tool in the upholding of religious tolerance, a weighty matter in a place as diverse as the Commonwealth, and especially important in contrast with the rest of Europe, where the faith of each country depended on the faith of its monarch. But the Republic could not function properly with every decision at the mercy of whim and veto. With the magnates enjoying their so-called Golden Age of Privileges, reform was all but impossible.

So, imagine you are radical political thinkers nobleman Ignacy Potocki and priest Hugo Kołłątaj, and you are sick of seeing your country fall prey to its neighbours while the magnates bicker among themselves. Imagine you have sat down and prepared a lovely new Constitution which decreases the privileges of the nobility and abolishes the liberum veto. How do you possibly get it legislated?

You get crafty and call a Confederate Sejm- a special kind of parliament meeting during which the liberum veto is prohibited and majority vote rules. And you call this meeting in secret, right after Easter, knowing a great number of the deputees most likely to oppose you haven’t returned to the capital from their holidays yet.

Snap. May 3rd, 1791, the first codified Constitution in Europe  – pierwsza w Europie konstytucja ujednolicona (second in the world after the US) was declared in Poland.

So, what did the Constitution change?

It reformed the government, dividing it into legislative, executive and judiciary branches (after Montesquieu’s model). It also decreed that ministers could be tried and judged.
It improved the rights of the peasants and decreased the privileges of the nobility, doing away with the liberum veto. The Sejm and Senate would now pass legislations by simple majority vote. The voting rights of landless nobles were also taken away, thus making it impossible for wealthier magnates to purchase their votes.
It made the peasants and townspeople political equals, and placed peasants who had previously been completely at the whim of their noble masters under the protection of the government. It also declared that refugees and new settlers would not be bound to any landlords.
It gave the citizens of royal cities the right to hold posts previously reserved for nobility, such as public offices and military commissions and even seats in the Sejm. It also guaranteed them the right not to be arrested without warrant. These rights could be extended to citizens of private towns.
It abolished free elections; the throne was now hereditary, with elections occurring only at the end of a dynasty. This was an attempt to decrease foreign influence on the choice of rulers (it was starting to get silly). The instution of pacta conventa – a document each monarch had to sign to pledge his respect for the laws of the Commonwealth- was also preserved.
It established Catholicism as the national faith, but preserved the earlier freedom of religion.
It transformed the union between Poland and Lithuania into a unitary state called the Republic of Poland, which meant the armies and treasuries would no longer refer to two separate authorities. The Lithuanian deputies were concerned for their rights, many protesting the decision. To appease them, it was decided that Lithuanian deputies would hold a guaranteed proportional number of seats in the new government.

Unfortunately, the Constitution was short-lived. Fourteen months was all it took for the pot to boil over; not only was there a strong opposition within the country, but our neighbours did not take too kindly to our liberal reforms, either. Why would they? They liked Poland weak and chaotic, and thought of it as of a sort of land reserve with which to replenish their losses on other fronts. Catherine the Great found the idea of free peasants especially appalling- she feared a massive exodus from Russia.

So, in 1792, Russia attacked. Unable to push back, King Stanisław Poniatowski thought to stop the conflict by surrendering and agreeing to hand the reform over to a conservative confederacy mounted under the protection of…none other than Catherine the Great.

The results were disastrous. The Constitution was torn apart, almost all of its reforms scrapped, and many supporters forced into exile. Worst of all, Poland was once again forced under foreign heel and partitioned for a second time, losing over 100,000 square miles of territory to Russia and Prussia. Even the conspiring confederates hadn’t predicted this one! The additional documents the creators of the constitution were working on- namely, a ‘moral and economical constitution’ which was to address the civil rights of all citizens, including the most overlooked peasants and Jews, were never completed.

Though the original Constitution was not a success (even its co-authors ominously called it “the last will and testament of the expiring Country”), May 3rd is now an extremely important national holiday in Poland, celebrated since 1918.