If you were in Poland last week, you know there was one bit of sad news that was impossible to miss. The death of professor Zbigniew Religa. Yesterday was his funeral at Powązki Cemetery in Warszawa. This was much talked about, too. Not only because professor Religa was a famous kardiochirurg (heart surgeon), but also because he was an avowed ateista (atheist). His funeral service was entirely secular, and I didn’t even know that Powązki has an area where non-Catholics can be buried.

I admit, I don’t know much about medicine, and all I ever learned about cardiac surgery and heart transplants was from watching ER, but even I knew who Zbigniew Religa was. He was, without a doubt, the most famous Polish medical professional. By perforning the first heart transplant surgery in Poland, he proved that our country was capable of world-class medicine. And to the people whose lives he saved by giving them new hearts in his clinic in Zabrze, he will forever be a true hero.

His funeral was broadcast on TV and it was a very touching ceremony. People came from all over the country to pay their final respects. Professor Religa was buried with full honors normally reserved for heads of state and the like.

The saddest part of this story is the irony of his death. He died of lung cancer. Even though he was a highly educated heart surgeon fully aware of the dangers of tobacco, he was also a devoted smoker. And in his own words, he was “unable to quit.” When his lung cancer was detected, it was already in a very advanced state.

I myself don’t smoke, but I know a couple of people who used to justify their own nicotine addiction by saying that if Dr. Religa could smoke, and he was the Minister of Health at one point, then so could they. This week they both pledged to quit. 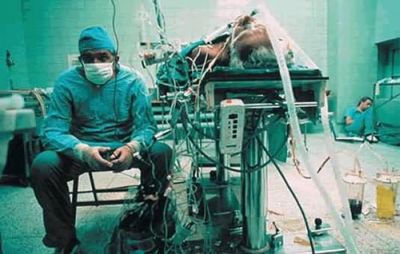 It was taken by Jim Stanfield and published in National Geographic in 1987. The doctor in the photo is Zbigniew Religa. The patient is still alive and attended the funeral yesterday – he was interviewed by the media.