Did you know that Poppy is the national flower of Poland? Posted by Kasia on May 21, 2021 in Nature, Traditions

National Flowers (kwiaty narodowe) are symbols representing a country. Some national flowers have cultural or religious roots (korzenie kulturowe lub religijne) that go back hundreds or even thousands of years and may or may not have been officially adopted. The national flower of Poland is a beautiful red poppy (czerwony mak)! 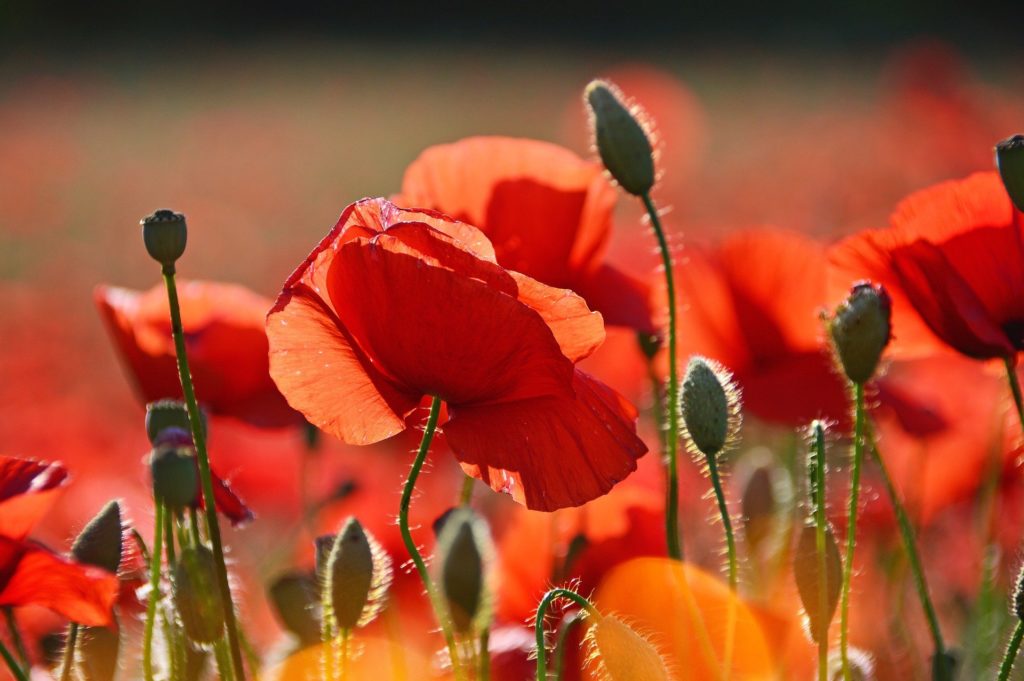 Native flowers (rodzime kwiaty) of Poland are often found growing in the wild throughout most of eastern Europe. While the majority of these flowers are now commonly found in the United States, they were first introduced from European countries. Native Polish flowers tend to grow easily both in the wild and in cultivated gardens, dotting the landscape with bright splashes of color.

Corn poppy , also known as Flanders poppy, is native to Europe and is named for its tendency to flourish in fields of cereal grains, such as wheat or corn.

Fields of poppies. Image by R. O. from Pixabay

When used in wartime commemorations (upamiętnienia), red poppies in particular are believed to represent respect and solemnity for fallen soldiers (szacunek i powaga dla poległych żołnierzy).

Although it is best known for its vibrant shades of red, the poppy flower can be found in many other colors as well. During and after World War I, fields that had been disturbed by battle bloomed with Corn Poppies, and the flower has become a symbol of that war.

The meaning of poppy varies between countries and cultures.It is a common symbol that has been used to represent everything from peace to death or sleep. When used on tombstones, poppies represent eternal sleep (wieczny sen). This symbolism was referenced in “The Wonderful Wizard of Oz”, in which a mystical poppy field could make the characters sleep forever.

When used in wartime commemorations, red poppies in particular are believed to represent respect and solemnity for fallen soldiers.

Poland has the red poppy as the national flower, but this flower left a mark across the world. Many wear red poppies to remember the fallen of WWI.

The black seeds from the poppy are edible and uniquely tasty on their own. They are great as an ingredient in bread or cakes. The petals (płatki) of the red poppy are great for dye, making them a perfect natural solution for dying medicines and wines. The dried petals also offer a pop of color in potpourris and dried flower arrangements. Red poppy is a great addition to any garden, and of course, looks lovely in flower arrangements.

With so much beautiful history and world symbolism, it’s no wonder the red poppy has been so popular. This timeless flower is sure to keep impressing everyone for decades to come!