Going underground Posted by Kasia on Dec 20, 2013 in Places to visit

Underground experience is not just a challenging adventure, but also an excellent idea to learn about both conservation and history in practice. It boasts great enthusiasm and popularity among tourists, who are keen on its uniqueness, mystery and excitement it evokes.

In Poland, there are over 70 underground tourist routes such as caves, old mines and dungeons, building constructions under old towns, post military areas, bunkers and more. Many kept closed for years are now regularly made accessible to the public. Each and every one of them, though might seem alike to constant visitors, make an unforgettable first impression. Each is unique, scented with secrets, spirit of old tales, thoughts of legendary rulers and inhabitants dating centuries back. But there is so much more to it than just educational aspect as the un-earth experience kicks off imagination, and encourages even more in-depth exploration. Most can be visited all year round as they preserve relatively constant temperature, protect from heat in the summer and from freezing in winter.

The underground tourist routes in Poland can be grouped according to their origin or original use into caves, mines and shafts, middle-age dungeons and underground stores, post-military objects, etc. 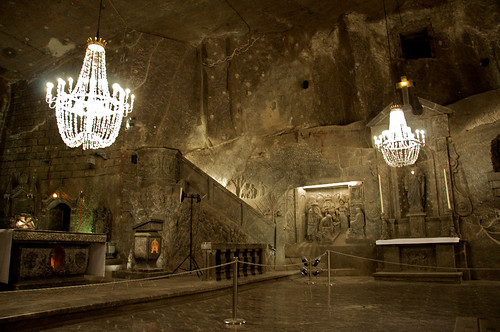 If you have time and you are in the area, definitely worth visiting. I already posted few blogs about Wieliczka, so here is few words about Bochnia.

The salt mine in Bochnia is the most unique monument and at the same time the greatest tourist attraction in the Bochnia county. This oldest mining plant in Europe had been functioning since 1248, what makes more than 750 years. The salt and its extraction have contributed both to the development of the town and the whole region. At present, because of running down the salt deposits, the salt mine doesn’t work any longer and as an industrial plant is now going into liquidation. Only the oldest and most interesting parts have been preserved and are now under the restoring protection. After some necessary modifications, a part of the mine workings was made open to the public as a tourist route, while the biggest of the preserved chambers (Ważyn chamber) was adjusted to fulfil recreation and sanatorium purposes.The biggest and best preserved among all chapels in the salt mine is St. Kinga’s chapel. It was raised in 1747 under the name of St. Guardian Angels New Chapel. In 1782 the name was changed into Blessed Kinga chapel. The main elements of the chancel are: St. Kinga altar, St. Barbara altar, a pulpit carved in salt and salt sculptures of St. Kinga, St. John Nepomucen, St. Wojciech and St. Thomas from Akwin. Every year on Christmas Eve and on the Patron’s Day (St. Kinga’s) there are High Masses conducted in the chapel.

I know where I’m going next time I’m in Poland!