Polish Independence Day Posted by Anna on Nov 12, 2008 in Culture

Yesterday (November 11th) was the Polish Independence Day (Dzień Niepodległości), but according to my contact in Gdańsk, the celebrations were mostly invisible. The white and red flags appeared on street corners, but I was told that was about the extent of it. Most people were just happy to get an extra day off. And what did they do with their day off? They went shopping, of course. Apparently, the malls places that dared to defy the new law ordering them to stay shut for the holiday (and there were a few of them) were quite crowded.

Yes, as you can see, I’m back in Gdańsk. And I plan to continue with my to-do list, which I had prepared for my last visit three weeks ago.

But back to the Independence Day topic, shall we? It’s a relatively new holiday. I say “relatively” because it didn’t exist back in the olden times when I was born. Back then I think, but don’t quote me on it, Poland had a different “independence” day, which wasn’t even called that. Instead, it was called “National Day of Rebirth of Poland on the anniversary of signing the PKWN Manifesto” and it was celebrated on July 22nd, and if you ask me, that was quite pointless in the first place. A major holiday in the middle of summer when everybody was on vacation anyway? Well, that’s the famous communist logic (or rather – lack thereof) for you. 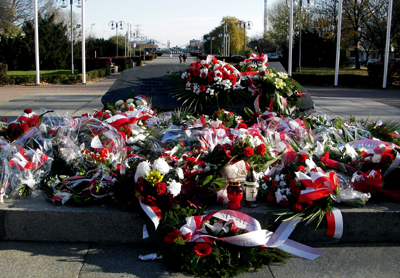 Personally, this independence day, reminds me of Thanksgiving. In a way, it’s also a day to give thanks, and on November 11th many Poles do just that. Initially – they gave thanks for the end of the communist rule, now for an extra day to shop.

But seriously, it’s supposed to commemorate the anniversary of the foundation of the Second Polish Republic in 1918 after 123 years of partitions by Austria, Germany and Russia. It was celebrated only twice before WW2, and then reinstated in 1989.

Few people remember now (especially few young people) that back in the olden days there was also a holiday in early November, alas for a very different reason. It used to mark the anniversary of the Russian (October) Revolution and was celebrated on November 7th. And in 1989 the government knew they couldn’t just take away a day off and give nothing in return. So voila, we have a redressed holiday with a different name and an occasion we can be proud of.

And the old “independence” day on July 22nd? Now it’s a day to celebrate the Baltic Sea,
or somesuch.

PS. I’m having a hard time uploading images, so we’ll have to wait until I get to a computer that I can actually use 😉