Stary Piernik and Other Expressions, part 1 Posted by Anna on Nov 8, 2008 in Culture, Vocabulary 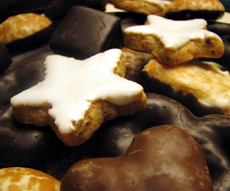 John H. came up with an excellent suggestion for a blog post and I gotta say that neither I nor my friends have ever had so much fun gathering material and doing “linguistic” research. Some of those expressions – I even forgot they existed. Like “stary piernik” for example. When translated literally, it becomes “old gingerbread.” But in fact, it’s a gentler version of a more “to the point” Polish expression, which is not quite polite – “stary pierd…” and I don’t think I should be teaching you these, anyway.

(Now you see why my friends and I had so much fun… I think we event invented a couple of new Polish curse words!)

But, stary piernik is a rather benign version – and it means something like “old fart” or “old geezer.” And just like in English, it’s used to describe men of a certain age and certain characteristics.

And while we’re on the subject of “piernik” – this word is also used in another idiomatic expression:

“Nieopierzony kurczak” was another example given by John. Translated literally it becomes “unfledged/featherless chickling.” And as you can easily guess, it’s used to describe a young, immature and inexperienced person.

And while we’re on the subject of young and inexperienced, another useful word is “żółtodziób.” Literally – yellow beak.

Also, just as in English, you can describe someone as being “green” – “zielony” – a total newbie.

We will continue with this in the future. For now, here are the words we’ve used today:

And I don’t know about you, but that photo of pierniki makes me very hungry for some reason. I can just about smell the freshly baked lebkuchen… Hmmmm….