Diversity or Political Correctness? Posted by Anna on Nov 5, 2008 in Culture

A while back I pledged that I wouldn’t write here about politics and religion, and for the most part, I stuck to my promise. But today, I will break it and talk about religion, albeit vaguely and not in the way you think.

People abroad always think that Poland is a uniformly Catholic country. And it sure does look like it. There are churches everywhere you go, and big crosses, and statues of John Paul II (Jan Paweł II). And then there’s Father Rydzyk riding in his Maybach. Or was it his very own private helicopter?

Anyway, you get the picture, Poland is a seriously Catholic nation and proud of it. You’d never think that there might be other denominations active in the country. So, imagine my surprise when I went to visit my friend who was in the hospital, waiting to give birth, and saw this: 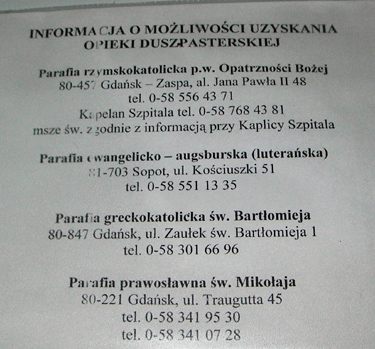 This is a list of various religious services and chaplains available for the patients. It lists Catholic, Lutheran, Greek Orthodox and Russian Orthodox options. When I asked a nurse (quietly of course, as not to embarrass my friend) she said that the hospital could also arrange for a rabbi or an imam, if a patient requested it.

This was not a private hospital. This was a public hospital named after a Catholic saint. A hospital with dirty corridors and restrooms without toilet paper – my friend wanted me to bring her a couple of rolls, which she carefully hid by her bed. I asked the nurse if they were mandated by law to post such a note. She said that no, not really, but that occasionally they did have patients who weren’t Catholic. And then she added that some patients from out of town might not know that the hospital could provide chaplains of other religious denominations.

I don’t know if this is just an example of political correctness, but to me Poland has never seemed very politically correct.

What it did make me wonder was this – if this was just a normal public hospital, I want to know how it works in a private institution. Alas, my friend gave birth before she could transfer to a fancy private hospital, and I didn’t have a chance to find out. By the way, it’s a girl!