Reading in Polish – translations or “native” books? Posted by Anna on Jan 9, 2010 in Uncategorized

It’s styczeń (January) now, dziewiąty (ninth) to be exact. Do you know where your postanowienia noworoczne (New Year’s resolutions) are?

Mine have already been claimed by the vicious vortex known as “real life.”

But maybe I should lead by example and come clean regarding my 2009 resolutions. Which were… Yeah, what were they? Ah yes! Czytać więcej książek po polsku – to read more books in Polish. Well, what I should have said was – “przeczytać przynajmniej jedną książkę po polsku” – to read (and actually finish) at least ONE book in Polish.

I don’t know whether it’s my fault that I failed, or whether the books I picked were really that boring that reading them was a form of torture. In retrospect, I should have stuck to the classics. But even when I had “Krzyżacy” already in my hand, watching the film proved just so much easier, not to mention – convenient, because it was being shown on TV right around that time.

I’m not going to list here the contemporary Polish writers whose books I attempted to read, because for all I know their works might be delightful to somebody else, and I don’t want to label them unfairly as coma-inducing.

As a last ditch effort I thought that reading something by my favorite author might fulfill my one book quota in Polish. And I didn’t even care anymore that the book was actually a translation from English. I dug up my copies of “Łups” (“Thud!”) and “Bogowie, honor, Ankh-Morpork” (“Jingo”) and valiantly plunged in. 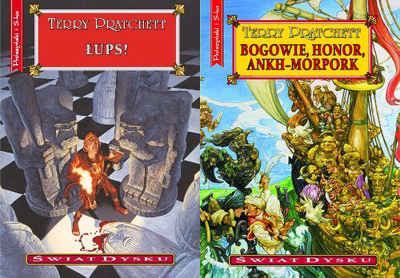 Yes, I am a huge Terry Pratchett and Discworld fan. And I thought that by reading something that I already know and enjoy, it might make the experience that much more pleasurable. And as much as I would like to say that it was so, I can’t. I gave up on the Polish translations very quickly.

Now, please don’t get me wrong. Those were both very good translations. The translator, Piotr Cholewa did a fabulous job. But unfortunately, he’s not Terry Pratchett and a translation is and will always be just that – a translation.

And that brings me to today’s question. You see, I’ve always advocated reading books in the language you are learning. And I’ve always thought that reading translations of books that you already know might be easier and more fun. I’ve done it myself in a couple of different languages and it seemed to work fine. Until I tried to read Świat Dysku (Discworld) novels. Which leads me to believe that maybe I was wrong all along. Maybe sticking to books written by native speakers in their native languages is a better idea.

What do you think? Are translations OK, or is it better to go the whole nine yards and instead of Polish versions of foreign books take the “sink or swim” approach and pick up a 100% “native” work?