Today is what seems to be one of the most popular and beloved Polish traditions – Tłusty Czwartek (Fat Thursday). There were lines of people in front of every cake shop and bakery that I passed today in Trójmiasto. Everybody was patiently waiting for their share of pączki. Personally, I’m not a pączki fan. Myself, I much prefer faworki, but as I’m too lazy to make any, I’ll celebrate Tłusty Czwartek with a slice of drożdżówka ze śliwkami (plum yeast cake), which has been sitting in the kitchen waiting to be eaten since yesterday.

But what is Tłusty Czwartek anyway? It’s the last Thursday before Lent (Wielki Post), hence once of the last occasions when good Catholics can stuff their faces, at least symbolically. Because we all know what Lent means – fasting and giving up all the stuff we love but can go without for a few weeks.

So, some countries have fat Tuesdays, and some – fat Thursdays. And for as long as I can remember, Tłusty Czwartek has always been taken very seriously in Poland. Today was no exception. 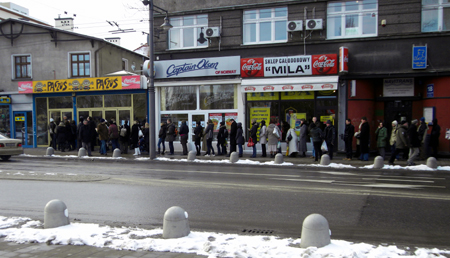 Queuing up for pączki in Gdynia.

Actually no. Not all the time. We also had a demonstration in front of Urząd Wojewódzki in Gdańsk. There were sirens, flashing lights, banners, smoke and fire crackers. And plenty of police and other guys in uniforms, who instead of dispersing the crowd, were the crowd. 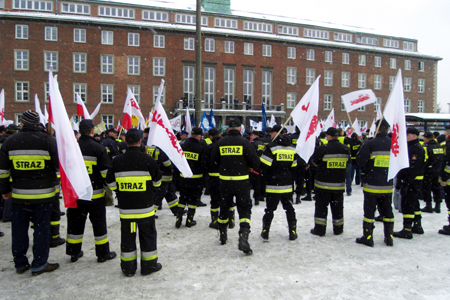 This was only one of many such demonstrations in Poland today. And the reason? Members of services such as police, fire fighters, border patrol, customs officers, city watch and other uniformed professions were demonstrating against their new retirement policy.

But since it was cold outside and snowing, and they were not giving out any free pączki, we left after a few minutes.

And now, if you excuse me, I have Tłusty Czwartek to celebrate. My cake is waiting.