Beach Food in Rio de Janeiro Posted by Rachel on Jan 23, 2009 in Uncategorized

On the beach and boardwalk in Rio, you can get lots of different food from mobile vendors, including boiled corn, popcorn, ice cream, churros, sandwiches, Middle Eastern food, soda, and plenty of snacks.

Now, several companies are introducing special carts to the boardwalk in Rio so you can buy a variety of food and beverages fresh. The most notable is the chope cart, a cart with a Brahma beer tap. One hundred and fifty carts are currently operating along Rio’s beaches, offering 250mL beers for R$2.90 each and 400mL beers for R$3.50 each. Some vendors have been selling up to ninety liters of beer a day. 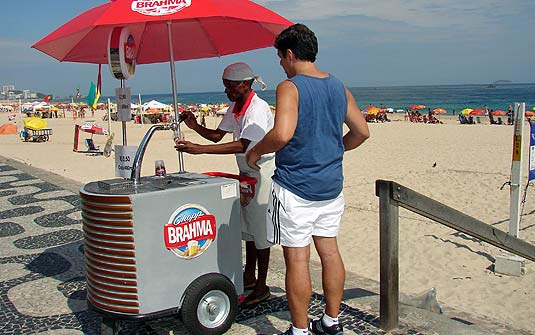 Another company, called One, will launch a series of frozen caipirinha carts this summer, offering various flavors of the popular cocktail, including strawberry, mixed fruit, and passion fruit. Another company, Camaretto, based in the northern city of Salvador,  launched a series of carts to sell fresh grilled shrimp for R$4 a kabob, which are grilled in front of the customer.