Leram muitos livros esse ano? Have you read many books this year?

As we have previously mentioned on this series, reading texts in another language is a fundamental tool for improving our vocabulary and comprehension skills. Novels can be a fun and engaging way to do so. Today’s post will talk about the 20th century literary phenomenon Paulo Coelho. Although his work here in Brazil is sometimes widely criticized by many literary experts, it is undeniable that Paulo Coelho enjoys a high ranking reputation abroad and is celebrated by muitos fãs (many fans). I have selected two suggestions of his popular books to help you get started. It is important to remark that his novels are available in bookstores both in Portuguese and in English, so you might even try to experience a bilingual reading to compare the two versions and practice your Portuguese! 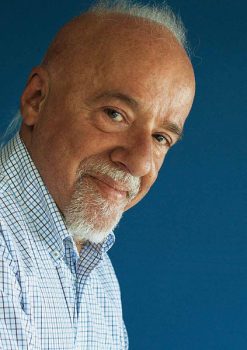 Born in Rio de Janeiro, Paulo Coelho kept a journal from a very early age and would enter poetry contests at school. Despite his parents’ protests, Coelho decides to pursue his dream of becoming um escritor (a writer), even dropping out of law school to become engaged with the hippie community. He also worked as a compositor (songwriter)and was close friends with Brazilian rock musician Raul Seixas. A prolific author, Coelho has over 30 livros publicados (published books), with his work being translated into 66 languages and even being featured in Guinness book as the most translated living author in history. He elaborates on themes such as magic, occultism, spirituality, always trying to bring life-affirming messages to his leitores (readers).

O Alquimista is not only the best sold Brazilian novel of all times, but also listed as a best-seller in dezoito (18) other countries, with over 80 million copies vendidas (sold). It portrays the voyage of a sheperd boy who, after having a recurring dream of a mysterious treasure buried in the Pyramids, decides to go on a jornada (journey) to find it and, as he follows his path, finds himself on a process of self-discovery and fulfillment. O Alquimista has been declared to be a favorite and life-changing book by many celebrities, such as Will Smith, Madonna, Bill Clinton and Pharell Williams.

Published in 1990, Brida follows Coelho’s typically mystical style and it revolves around a young Irish aspiring bruxa (witch) on a quest for spiritual evolution, wisdom, magical powers and knowledge. Brida encounters a hermit wise man in the forest and a divinity named Wicca, whose teachings grant her a fuller understanding of natureza (nature) and o mundo (the world).

For more information, check out his website (in English, Portuguese and many other languages):