“Sorria, você está na Bahia!” (Smile, you are in Bahia!) Our third estado (state) covered in the series of texts that pave the way to each of Brazil’s 27 federative units is history, music, sol (sun), mar (sea), joy and dance. With the design of its fronteiras (borders) that closely resembles Brazil’s own outline, Bahia is considered the oldest state of Portuguese America, because it was in the city of Porto Seguro that European settlers first landed on the continent. This is the largest state in nordeste (northeastern) Brazil, bordering eight other regions and bathed by the Atlantic Ocean. If you want to know a little more about the wonders of Bahia, come with us! 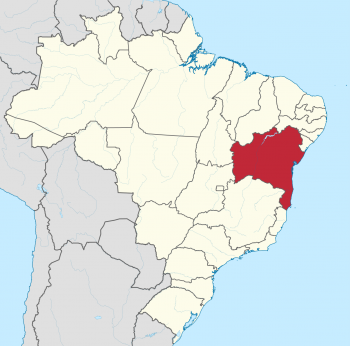 Você sabe o que é que a baiana tem? Do you know what the Bahian has? You may remember this famous song by Carmen Miranda, the famous Brazilian star who performed with a hat covered in tropical fruits. Indeed, Bahia is full of magic and mystery. Its territory covers approximately 530,000 square kilometers, roughly the size of France, and has a population of over 15 million de pessoas (people). Historic Salvador is its capital and the cidade (city) with the largest população negra (black population) outside Africa. Its famous ladeiras (hillsides) and prédios coloniais (colonial buildings) keep the memory of luta (struggle) and resistance of the povo africano (African people).

And it is because of its rich history that Bahia has become a unique state in Brazil. The melting-together between the Europeans and the various African people has created a culture of its own. It was here that the best known Afro-Brazilian religion was born, the Candomblé. Along with it, we have the traditional figure of the baianas, who are the followers of this religion. Always dressed in fancy lace dresses and white turban, they can be found all over town, and you will often see them cozinhando (cooking) delicious acarajés and abará throughout the state.

Also, if you are into festas (parties) and want to get to know Carnaval up close, don’t miss out on Salvador. Bahia’s capital is the home of the largest Brazilian carnaval celebration! As if it were not enough to extend all the festivities throughout the summer, it is where you can follow the famous trio elétricos (stage trucks), traditional axé music or just enjoy one of its numerous unforgettable praias (beaches). But Bahia is not just about the ocean. The state is vast and also largely consists of sertão (backlands), where the calor (heat) is strong and the chuva (rain) is scarce, but there are also many mountains, parks and cachoeiras (waterfalls). Be sure to see the wonders of the Chapada Diamantina, a cluster of mountain ranges and springs that will mesmerize you!

Land of great escritores, músicos, artistas plásticos e diretores (writers, musicians, artists and filmmakers), Bahia was the home of Jorge Amado, João Gilberto, Glauber Rocha, Caetano Veloso, Gilberto Gil and Narcos’ star Wagner Moura. Be sure to plan to visit. And if you have ever been to Bahia, comment your tips there. So, do you want to find out what the baiana has?

A lot has been written about Bahia in our blog. Check these out these related posts to catch up!:

Tourism in Brazil: Salvador at Sea