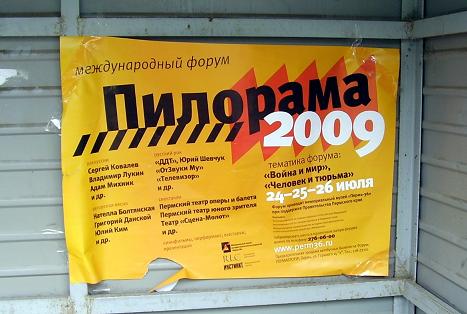 Only on the way back from «Международный форум Пилорама» [The International Forum Pilorama] held in the village «Кучино» [Kuchino] outside and on the territory of formerly GULAG camp, presently museum of political repressions «Пермь-36» [Perm’-36], did I see a real-life (as apart from online) advertisement for it. Inside a bus stop in «Чусовой» [Chusovoy], which is the nearest town…

It’s been over a week since the last post here on the Russian blog, something for which I am very sorry and I hope that you can forgive me for not making it all the way to a computer – or, more correctly, to a computer with internet – during the entire previous week. The first half of it was spent visiting a close friend and her family in the city of «Курган» [Kurgan] which is located in the only part of the world that bears the name of «Зауралье» [a word that could be translated as ‘behind the Urals’]. I had only just barely got on the bus back to Yekaterinburg on Thursday – traveling by bus in Russia can only be recommended to the truly brave and it is not even close to as romantic as riding the train in Russia – when a friend of mine called and asked if I would want to go with him to a festival called «Пилорама» [“Pilorama”] that would take place during the weekend on the premises of the famous GULAG museum «Пермь-36» [“Perm-36”]. My friend, who is also a foreigner in Russia just like me, doesn’t speak Russian, had never visited the museum before and told me that he would not go without me. It was the second time I heard about this festival. The first time I heard about it had been only a week before; on Thursday when I was walking in the footsteps of Shalamov in «Соликамск» [Solikamsk]. There I had – surprisingly enough – managed to run into the former director of the town’s regional museum and as she had given me a tour of everything there is to see in Solikamsk, she told me about the annual event “Pilorama” at everyone’s favorite museum of political repressions. I pondered going there on my own, but decided against it as I do not own a tent and going there would involve tenting. In retrospect I’m very glad that I didn’t go there on my own, as on my own I would have taken the bus there and probably not succeeded in getting a seat on one since there were many thousands of visitors to this event. And more than a few of them came on buses that kept pouring in during both the first and the second day. I was surprised to see so many people there, since I had paid more attention to the whole GULAG themed part of this civic forum, and managed to not notice what many others – especially «молодёжь» [youth; young people] – came there for in the first place: «концерты!» [concerts!]. 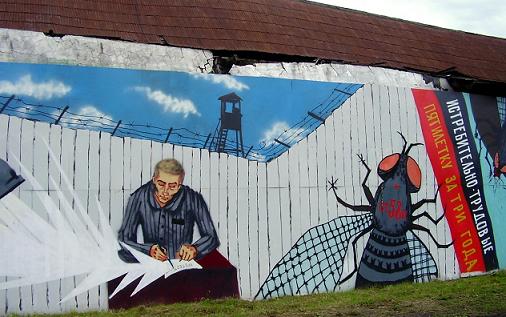 Here is some art painted on one of the walls inside the former camp’s territory. The prisoner is writing the word «протест» [protest] while on the back of the fly it says «статья 58 (пятьдесят восьмая):10» [Article 58:10]. This infamous article cost many millions of people their lives during Stalin’s rule. The number 10 of this article in the USSR’s «уголовный кодекс» [penal code] stood for ‘Anti-Soviet and counter-revolutionary propaganda and agitation’. Also written are the ironic phrases «истребительно-трудовые (лагеря)» [destructive-work (camps)] and «пятилетку за три года» [the five year plan in three years]. 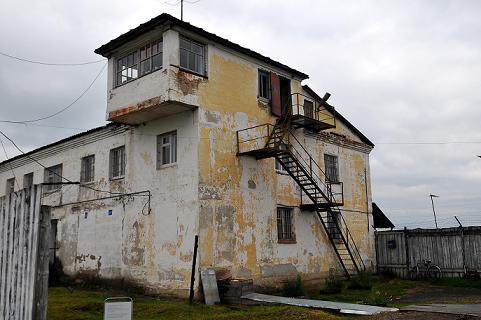 Both I and my German friend were very surprised to find that this building – which during the festival served as «гостиница» [hotel] for the VIP-guests – is currently used as a neurological clinic… Is this really the right kind of condition for a building to be used for medical purposes? Or am I just being overly sensitive again?

I fully understand if some faithful readers of this blog are thinking: «Хватит ГУЛАГа уже!» [“Enough with the GULAG already!”] right now, and I promise you that this is the last post I’ll be writing on this subject for a while (even though I personally think this is a highly important subject which deserves to be observed often and written about a lot and talked about everywhere and discussed even more than this). One of the things that surprised me most about this international forum, or civic festival – call it as you may – was how diverse in age the visitors there were. Teenagers mixed with old people and whole families with not just their kids but also their dogs were seen everywhere and it made the place look like a true scene of traditional Russian «народное гульяние» [people’s outdoor party; festival; celebration], usually something that happens in this country on dates like «9 мая» [9th of May], «12 июня» [12th of June] or «день города» [‘The City’s Day’ – every Russian town, both tiny and huge, have their own ‘day’, more often than not it falls on a date during the short but intense Russian summer]. I had never before seen it happen on a field outside a former GULAG camp located in a place that closely resembles ‘the middle of nowhere’. It was a very impressive view. What was also impressive was Pilorama’s large program – not only were there several different concerts by Russian groups, but also many movies, many discussion groups, quite a few theatrical plays shown on stage and exhibitions in the barracks. During Pilorama excursions of the camp was for free; though an excursion is not that expensive if you are unable to visit the museum during the last weekend in July. One could also buy many rare books in Russian on GULAG camps. One exhibition was about German concentration camps, another about Russian writers who spent time in the Soviet concentration camp system (yes, Shalamov was presented among them). All in all, the organization of this event could not have been better. Only one thing could’ve been improved – the weather… it rained from time to time both during the first and the second day. Due to the rain I didn’t stay for the last, third, day, but what I managed to see I was very pleased with.

Of course, I understand that many of the young people that went there did so because they wanted to spend time with their friends – camping, drinking beer and listening to free rock concerts. But that is as a matter of fact the right approach if you want to raise awereness about this kind of things among young people in Russia today. Maybe while drinking beer and listening to their favorite band these kids will take a moment or two to think about this country’s past. And maybe go on an excursion. And maybe listen to one of the political discussions. And maybe think some more. And – who knows? – maybe that’s where «гражданское чувство России» [Russia’s civic feeling] begins?