And the winner is… Posted by josefina on May 30, 2010 in Culture, language 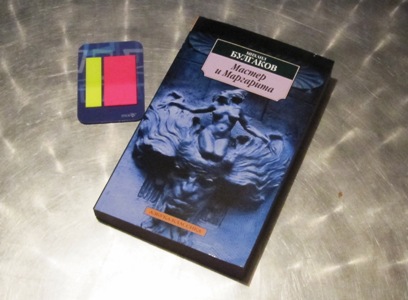 …«Мастер и Маргарита» [“The Master & Margarita”]! What are the stickers lying next to the book for? Read the post and find out!

It was a close race on the poll “Russian literature is better than sex” on our Facebook page, but eventually it was clear to everyone what book had won! The final list looks as follows:

5. «Петербург» [“Petersburg”] by «Андрей Белый» [Andrey Bely]: this modernism novel from the early 20th century by one of the the founding fathers of Russian poetry theory (we really should discuss both Andrey Bely AND his role in this in a post in the future) received 16 votes, or 11% of the votes.

4. «Доктор Живаго» [“Doctor Zhivago”] by «Борис Леонидович Пастернак» [Boris Leonidovich Pasternak]: my personal favorite pick – and the one I was trying to convince everyone to vote for but failed – received 22 votes, or 15% of the votes.

3. «Война и мир» [“War & Peace”] by «Лев Николаевич Толстой» [Lev Nikolaevich Tolstoy]: the classic ‘big brick’ of a work which everyone has to have read in order to be able to keep up an informed conversation on ANY topic received 28 votes, or 19% of the votes.

2. «Идиот» [“The Idiot”] by «Фёдор Михайлович Достоевский» [Fyodor Mikhailovich Dostoevsky]: perhaps it is not so surprisingly that it finished second, because many of our readers are Dostoevsky fans already OUT of the closet. This one of his five master pieces received 36 votes, or 24 % of the votes.

1. «Мастер и Маргарита» [“Master & Margarita”] by «Михаил Афанасьевич Булгаков» [Mikhail Afanas’evich Bulgakov]: started in 1929 and finished in 1940 by the writer himself, it took many more years before it was published in the Soviet Union. Now we can easily get this novel everywhere, which received 45 votes or 31 % of the total votes. 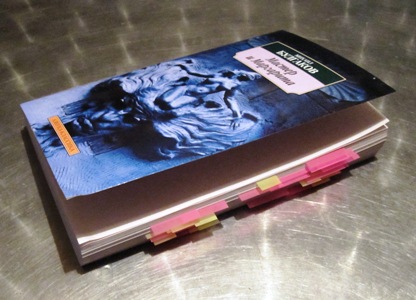 I used the stickers to mark each chapter in the novel. At first – because the only available stickers in the book store where I bought the book here in Yekaterinburg were in two colors – I thought I should have some sort of ‘plan’ for how to use them. I soon abandoned my plan and used them randomly… I advice you to do the same!

What’s the first thing we must learn now that we have decided to devote the summer of 2010 to reading «Мастер и Маргарита» [“The Master & Margarita”]? Obviously, how to tell other people about this in Russian! In Russian language book titles – despite the fact that the book itself, the «роман» [novel], so to speak, is an INANIMATE noun – we must treat the title of it as if it were ANIMATE, if it contains a person or a person’s name. Or, as is the case here, the names of TWO human beings: «Мастер» [The Master] and «Маргарита» [Margarita]. That’s why you’d have to tell Russians about what you’re intending to read this summer like this:

The same goes for any other title of a book (or a movie, for that matter) in Russian which hints at a human being in one way or another. Here’s two examples with two of the titles from the list which also have ANIMATE nouns in them:

If the title consists of an INANIMATE noun, then you won’t have to worry about this. All you need to do is remember to use «винительный падеж» [accusative] and you’ll be fine. Here’s two sentences with two of the titles on our list which are INANIMATE:

That’s the most important thing to begin with. After this we can start reading the book itself – in the original Russian! And now you’re probably wondering: “Where do I get this book?” If you’re in Russia, then the answer is easy: go to your local book store on the corner and buy it in a cheap paperback copy, like I did. I paid about 100 rubles for the copy pictured above on the photographs, and I think this is the standard prize for it everywhere in the Russian Federation. If you’re not in Russia, then there’s probably a library in your town that has a section with Russian books. And any library that has such as section MUST have a copy of “The Master & Margarita” – it is considered a classic! If they don’t, you should see it as your duty to let them know that they are missing out on giving their visitors a great Russian literary experience. Maybe there’s even a store in your town that sells books in Russian? If not, you can order it on the internet (I’m sorry that I’m no expert in this area – maybe Yelena can help?).

If all of these alternatives fail, you can download it here on http://lib.ru/ – an excellent site for finding all sorts of works of Russian literature!

Coming up: a neat schedule for exactly HOW to do this… Now I’m excited! Are you?