Are There Too Many Letters in Russian Alphabet? Posted by yelena on Sep 27, 2010 in History, language 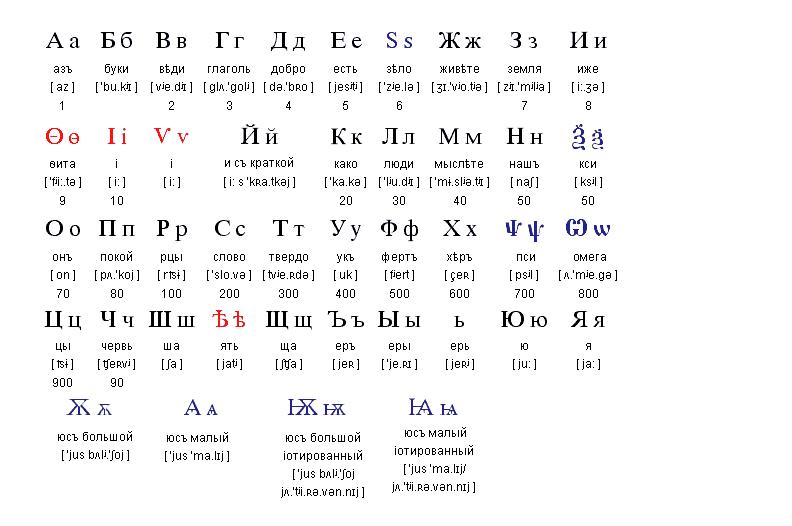 When I was little, someone explained to me that there was a reason Russian alphabet had 33 letters. There was a letter for each tooth (32) and one letter – «я» – for the tongue. And since «я – последняя буква алфавита» [«я» is the last letter of the alphabet], it’s best to «держать язык за зубами» [keep one’s tongue behind one’s teeth].

Do you remember David Roberts who, back in August guest posted his “200-ruble question“? This time David talks about some of the fairy recent (historically speaking) changes Russian alphabet went through. I knew the explanation I was given as a child had no historical merit.

By the end of the 19th century the Russian alphabet was down to 36 letters. Two of these, q and υ, had become rare, but «і» and «ѣ» were very common. The «твёрдый знакъ»  [hard sign] was much more common than nowadays: if a word ended in a hard consonant this had to be indicated by «ъ». For example:

Ran off to the forest with the dinner]

When we see «съ» and «въ» written like this we begin to see how Russian comes to have single letter prepositions that cannot be pronounced on their own – «с» [with], «в» [in] and «к» [to]. They all used to be followed by «ъ», so they were two-letter words, and «ъ» used to be a vowel in its own right, with a sound rather like the second “e” in Manchester (or, if you prefer, the “e” in Liverpool or the second “a” in Wallasey). In other Slav languages «ъ» still retains this sound, e.g. «Българя».

Proposals to reform the alphabet had already been drawn up before WW1 but were not implemented until after the October revolution. The letters «і» and «ѣ» were discarded, «и» and «е» being used in their place, and the use of «ъ» after final hard consonants was dropped. In the present system we know that if the final consonant isn’t followed by the «мягкий знак ь» [the soft sign] it must be hard.

The reformed alphabet was seen to some extent by emigré “White” Russian populations as the work of the hated Bolsheviks. The Russian emigré newspaper «Русская Мысль» [Russian Thought] established in France was always anti-communist, and as late as 1948 the paper was still not using the reformed alphabet.

However, they were not staying completely with the old system either. An article from a 1948 issue, that was reproduced in a 2010 issue retains the old letters «і» and «ѣ» in profusion, but «ъ» is not used at the end of words. Maybe they felt that using «і» and «ѣ» was enough to make an anti-Bolshevik statement and they saw the advantages of saving ink by doing without «ъ». Looking at the old text we can begin to work out some of the rules for using «і» and «ѣ».

Some time between 1948 and 1988 (when I first came across this newspaper) «Русская Мысль» finally killed off «і» and «ѣ». Was this by way of a grudging gesture to Gorbachev’s efforts at liberalization, or did it happen earlier, perhaps stimulated by the temporary thaw in the era of Krushchev?