Breakfast in Russia and a brief culture trip to 1978 Posted by ryan on Nov 10, 2021 in Food, Russian life, Uncategorized

I’m writing to you from the comfort of my desk, where, as always, I am dreaming about the breakfast that, unfortunately, I did not have time this morning to eat. To eat, to eat. But what can one expect to eat for breakfast in Russia?

Open faced sandwiches with meat and cheese are popular throughout Europe, and Russia is no exception. Usually they are topped with a slice of колбаса́ sausage and сыр cheese. Sometimes you can spread some паште́т pâté on the top. However, since it is open faced, remember the advice given by Кот Матроскин in the popular 1978 Soviet animated film «Тро́е из Простоква́шино» Three from Prostokvashino:

What could be more Russian than a towering stack of light, buttery bliny on a Sunday morning? These, if you are unfamiliar, are similar to what we know as crepes, and are usually prepared with a runny batter poured directly onto a hot сковоро́дка frying pan. Don’t worry if your first one does not turn out – it isn’t supposed to. In fact, there is a Russian saying Пе́рвый блин – ко́мом The first blin comes out as a lump, which means that an unsuccessful beginning to something is completely understandable, something akin to “practice makes perfect.” The first blin effectively absorbs excess oil and seasons the pan for subsequent blins.

The verb we usually use is печь блины́ to bake bliny, but I have also seen the word жа́рить to fry used for this purpose.

I suppose the heat source doesn’t totally matter for this verb, but, then again, what do we say in English for this? To grill pancakes? 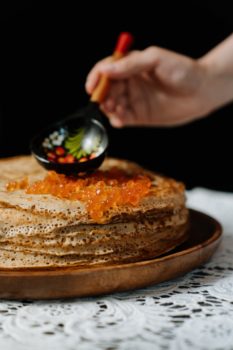 A similar dish to bliny is ола́дьи, which are also “baked” on a frying pan, but usually from a thicker, дрожжево́е те́сто leavened batter and resulting in little pucks of fried deliciousness. They can be served with whatever you would like, but I like them with варе́нье.

The ultimate protein-packed bachelor breakfast comes to you straight from the холоди́льник refrigerator! Just crack a few eggs into your pan and let them fry. It’s especially good if you let the bottom burn a little bit, but always serve sunny-side up. Be sure to place a sprig of укро́п dill on top of each желто́к yolk for a dainty touch to your weekday morning meal.

Of course, the verb used with яи́чница is жа́рить – жа́рить яи́чницу. As Verochka from the iconic 1978 film «Служе́бный рома́н» Office Romance said to her boyfriend over the phone (taking personal phone calls at work, I guess) with whom she had broken up with the day before:

This is a popular choice for serving children, especially in school. Many are given ма́нная ка́ша semolina porridge, which is cooked with milk. If you are lucky you will get some sugar and maybe even some raisins in it. It is served hot with a slab of butter placed in the middle. The крупа́ grains of semolina are very fine and therefore create a pudding-like texture when cooked in milk.

Which one of these do you like most of all? Is there anything you would like to try?