Everybody loves борщ [borscht]! Posted by josefina on Feb 7, 2009 in Culture, Traditions

There comes a time in everybody’s life when you need to get a little Russia into your everyday existence. Especially if you’re not currently in Russia, but constantly finding yourself outside of the Russian Federation, and thus persistently living without interacting with Russian culture on a day to day basis. Particularly will you suddenly find yourself craving Russian food. This problem is, however, easy to solve. «А как?» [But how?] you might wonder, and the answer to that question is even easier than the solution – throw a Russian style dinner party! Once again the question «как?» arises, but worry not, dear readers, because today I will show you an uncomplicated trick and at the end of this post you will inevitably exclaim «вот так!» [like that!]. Call some close friends and invite them over for dinner, but tell them only that you plan on cooking «борщ» [borscht], nothing else. The rest will be a pleasant surprise, and – as I would like to call it – the shortest visa-less trip ever possible to the great Eastern Motherland! What you need to create that special Eastern European coziness in the comfort of your own home (kitchen, of course!) isn’t very much, and if you’ve got a Russian store in your neighborhood it is even less. I decided to throw my own Russian style dinner party on my last Saturday at home in Gothenburg, Sweden (I’m currently back in the Urals) and lucky for me, Gothenburg has a Russian store called «Бабушка» [‘Grandmother’] where I could acquire the two essentials – «приправа для борща» [seasoning; flavoring for borscht] and «сметана» [Russian sour crème; ‘smetana’]. The recipe I’m about to share with you is for vegetarian borscht, though real Russian borscht (or Ukrainian borscht, for that matter) is made with meat, as I am well aware of. But I’m a vegetarian, so this is the only way I cook it. Probably many of you have your own special way of preparing borscht, and the way I make is in no way the only ‘canonical’ way of making it. Yet I must take some pride because the borscht I make is to die for. «Обещаю!» [I promise!] 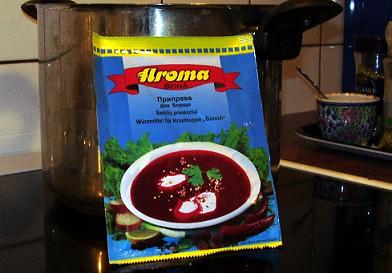 I bought two packages of «приправадляборща», one of them I used to make «бульон» [broth; consommé; bouillon] mixing it with one litre of boiling water. This I used as the ‘foundation’ for the soup; if you make it with meat, then you’ll use the water you cooked the meat in for this. When you make vegetarian borscht it is important to remember two things – to use more spices and more fat, which isn’t needed with meat, since there’s enough spice and fat in meat as it is.

This recipe is enough for six people to get two servings each (it is both Swedish and Russian custom to fill up your guests to the top). You’ll need «дваилитрибольшиекартошки» [two or three big potatoes], «пятьсотграммовкапусты» [500 grams of cabbage], «четыреилипятьсвёкл» [four beets] to start with. 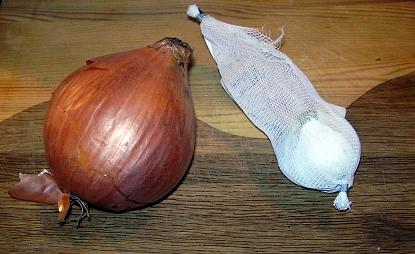 The first thing to do is to cut «одинлук» [one onion] and «четырелодкичеснока» [four garlic ‘boats’ – don’t know the word for it in English, but you know what I mean!] into very fine small pieces and fry them in a big pot. I used over 1 decilitre of olive oil, and I don’t recommend using any less. 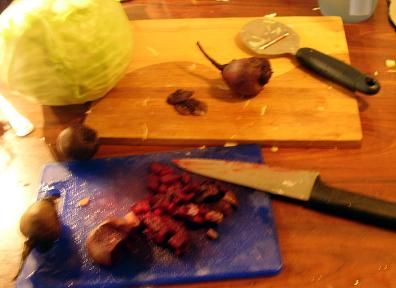 All the vegetables need to be cut into small squares, including «однаморковка» [one carrot] and as is the thumb rule in cooking Russian food – when you’re cutting things into tiny pieces, you know you’re on the right track! I would recommend slicing the cabbage with a ‘cheese slicer’ (as seen on the picture above next to the cabbage), though I know that’s an eccentric tool used primarily in Sweden. You could also chop it up with a knife, of course. 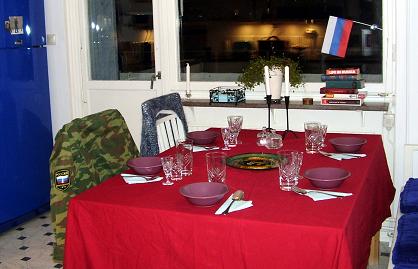 Then you put all of the ingredients into the pot, plus some more water, and let it boil for a little while, then putting down the heat and adding some more spices (like salt, pepper, «укроп» [dill] and «петрушка» [parsley] for example). Add about 2 decilitres of tomato paste to make it even fuller and ‘foodier’. Now the only thing left to do while the soup cooks – 30 minutes is minimum, but an hour or two only makes it even tastier – is to set the table. To create that exceptional Russian atmosphere in your own home all you really need to do is to set the table with a red tablecloth (I used a regular sheet for effect), a flag in the window, a couple of Russian books on the window sill, a knitted scarf over one chair, a Russian army jacket over another, a magnet with Medvedev and Russian modern art on the fridge, plus three glasses – for vodka, beer (or wine) and water. The vodka should be Russian, but the beer could be Czech or Polish, and the wine… anything red will do! 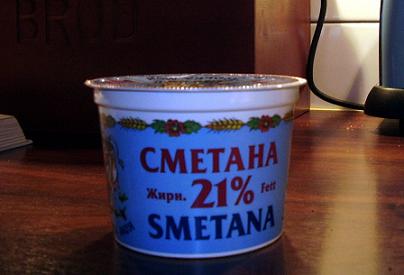 Of course there’s no real borscht experience without «сметана»! Start the meal by making a toast with ice-cold «водка» (put it in the freezer for an hour first) and then biting it off with some «огурчики» [salted cucumber]. A good choice for background music is the Russian Army Choir, which has made some excellent discs. The first song to play should of course be the Russian national anthem…

…and then your guests are ready to enjoy your borscht – but don’t forget the bread! It should be «серыйиличёрныйхлеб» [‘grey’ or ‘black’ bread; in other words whole-wheat], white bread in this context is a big no-no.

Incidentally, my dear mother also blogged about this our ‘borscht-experience’ – this is for those of your who are fluent in Swedish, or those who are just curious to see just what kind of outfits is appropriate for such a dinner party as the one suggested above.