In Russia Snow Walks… Posted by josefina on Nov 1, 2009 in language, News

A couple of days ago – I think it was «в среду» [on Wednesday] – we received our first snow here in Yekaterinburg: «выпал первый снег» [the first snow fell (down)]. On Wednesday, however, I had the bad luck to be feeling a bit under the weather – in Russian «я захворала» [I got ill; this perfect colloquial verb «захворать» means ‘to be taken ill’ or ‘(with instrumental case) to come down with (something)‘]. Because of this I was unable to catch «первый снег этой зимы» [this winter’s first snow] on camera and when this snow melted away in just a few days I felt very sorry for myself due to this, since I badly wanted to write a post about it here and as always attach some current photographs «из современной России» [from modern Russia]. Then I thought about the fact that this is «моя шестая русская зима» [my sixth Russian winter] and that I have plenty of pictures of snow from the five previous Russian winters that I have experienced in this country. And as I went through my archive of photographs on my «съёмный диск» [external hard drive] I was reassured that it is indeed so. But there’s always something special with the first snow. Every year it falls as if for the very first time. There’s something exceptional about those first fragile white snowflakes that makes us feel and act like children again. And this ‘something’ makes us smile as we look out the window and instantly feel an urge to put on our heaviest clothing and go out and try to catch one on the tip of our tongues… In my mind and in my memories Russia will always be dressed in snow. For the most obvious of reasons, when I look back and think of Russia I always see this country as a white wonderland where the skies are clear and blue, where the sun shines over glittering «сугробы» [snowdrifts] along endless Siberian highways… I know that most people who have never ever been to Russia – I know because they have told this me many, many times – think of this country as looking exactly like that «круглый год» [all year around]. But we who have been here, we who have lived here, know that this is not the case. But we also know that winter is best in Russia, don’t we?

And here we are again! Tomorrow it is already «первый день ноября» [the first day of November] and that means that «осень» [fall] has officially ended and that it is time for «зима» [winter] – «русская зима» [Russian winter] – to take over with full force! When the first snow came down on us this week, I looked out the window and then turned to my Korean roommate and said: «Снег идёт!» [It’s snowing!] Only after a while, as I watched the snowflakes tumbling around in the air outside, did it occur to me that the verb «идти» [impf., verb of motion used for movement in a particular direction: to go; to walk; to come; to come out; to follow] was no where near a correct one to use when describing the way the snow was moving.

Thus yesterday I asked one of my Russian friends who is a Master’s student of «русский язык» [Russian language] this important question: «Почему снег именно ИДЁТ в русском языке? Почему он не ходит?» [“Why is it that snow in Russian language walks? Why doesn’t it go around (without any particular direction)?”] «Ходить» is the indetermened variant of the verb of motion «идти», it indicates a movement there AND back again and means ‘to walk, to be able to walk; to run, to operate; to be going around’. She understood my confusion, but – «увы!» [alas!] – could not give me any answer other than that it, of course, would make more sense to describe snow coming down from the sky with another verb completely. The thing is that Russian language lacks such a thing as «снеговать» or even «снегить» [I made up both of these verbs; do not make a note of them!] as apart from, for example, my native language (Swedish!), and thus must use what it’s got. What does it have then? What else can we say when we see snow outside our windows but don’t really think ‘it’s walking’ but doing something different entirely? Let’s have a look!

And from this combination of noun and verb you can make another noun in Russian that describes this exactly: «снегопад» [snowfall].

«Снег выпал ночью» – [The snow fell at night (in the night, during the night)].

«вьюжить» is a verb that I have only heard from Russians but can’t find in the dictionary, though it is clear that it is made from the noun «вьюга» meaning ‘snowstorm; blizzard’. I’m not sure if this could be combined with «снег» in such a sentence as «снег вьюжит» [‘snow is storming’ or ‘it’s snowstorming’]. Perhaps one should be content with just saying «вьюжит» [‘there’s a snowstorm/blizzard going on’].

The same goes for the verb «метелить» made from the noun «метель» (fem.) [snowstorm; blizzard]. I always have a hunch here that you can’t say «снег метелит» but must go for a construction like «на улице метелит» [‘there’s a blizzard outside’] instead.

But since the most common verb used «со снегом» [with snow] in Russian is after all «идти» let’s have a look at how to make use of «совершенный вид этого глагола» [the perfect aspect of this verb] – «пойти» [to begin to walk, to set out; to start moving; (of snow, rain, etc) to begin to fall]: 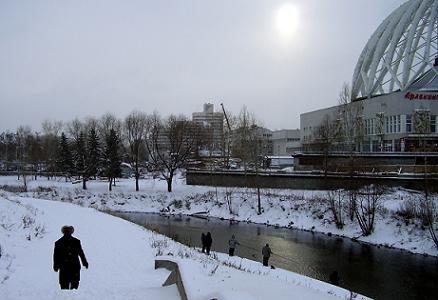 Yet on this photograph we have snow without any motion at all! Here «снег лежит» [snow is lying]…