On the Seriousness of Russian Proverbs Posted by josefina on Mar 31, 2010 in language, Russian for beginners 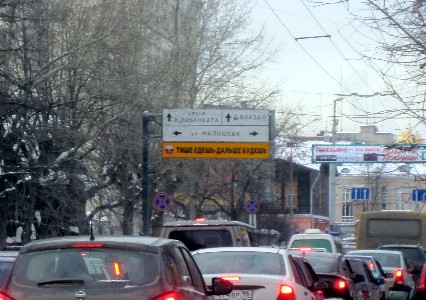 Do Russians take their «поговорки и пословицы» [pl. proverbs and sayings] seriously? I think so, but I’ll let you decide for yourselves – here’s the Russian proverb «тише едешь, дальше будешь» [lit. ‘the slower you go, the farther you’ll get’] in action placed on a sign over one of Yekaterinburg’s busiest streets.

Not only do Russians often comment on occurrences in every day life by using «пословица» [a proverb] or «поговорка» [a saying], sometimes they’ll even use «цитаты» [pl. quotes] from famous Russian and/or classic Soviet movies which «вошли в пословицу» [past tense: became proverbial]. Not always will these quotations fit the situation in question, but Russians are not strangers to adaptation. For example, when things didn’t work out with my boyfriend I explained it to my professor here at Ural State University by saying: «мне не везёт в любви» [I’m unlucky in love]. As an answer to this he told me: «не повезёт в любви, так повезёт в смерти» [”if (you’re) not lucky in love, then (you’ll) get lucky in death”]. This expression was actually nothing else but a reversal of the famous quote «не повезёт в смерти, так повезёт в любви» [“if (you’re) not lucky in death, then (you’ll) get lucky in love] from the classic Soviet movie «Белое солнце пустыни» [“White Sun of the Desert”]. Russians do this all the time – comment on every day life by using sometimes quotes from movies, sometimes century old proverbs, sometimes reversing them around to fit certain specific circumstances. Not always do they get it right (see the above-described incident with my Russian professor!), but they almost always succeed with one thing: «путать иностранца» [impfv. to confuse the foreigner].

I remember the first time we discussed the proverb «тише едешь, дальше будешь» in class back when I was still a beginner of Russian studying the language in Siberia. The expression made no sense to me at all when I translated it literally as: “the slower you go, the further you’ll be”. How can that be? How can I get further if I’m going slower? Where’s the logic here? It took me a long time before I realized what this proverb actually meant: “if you do something fast and sloppy then it won’t give good results”. The first thing we should know about Russian proverbs is that they often place the verb in second person singular – leaving the pronoun «ты» [you] out of the sentence, though. But by doing this proverbs and sayings are not actually pointing at ‘you!’ as an individual but at everyone together. This is in Russian called «безличная конструкция» [an impersonal construction] and uses either a verb in second person singular – like «едешь» above – or a verb in third person plural – like in the expression «говорят» literally ‘they say’ but usually it means ‘it is said’ (meaning we don’t know who ‘they’ are). When dealing with the above-mentioned proverb the second thing we should take into account is what exactly the word «тише» means in this context.

«Тише» is comparative to both the adverb «тихо» [quietly; softly; slowly] and the adjective «тихий» [soft, low; quiet, still; calm, tranquil]. One way of using the adverb together with its comparative version – as a simple illustration – could be like this: «он говорил тихо» [he spoke quietly] but «она говорила тише» [she spoke more quietly]. The adverb together with an exclamation mark – like this: «тихо!» – means ‘take it easy!’ or ‘be careful!’. Thus saying «тише!» as an interjection translates into English as ‘quiet!’ or a ‘please be quiet!’

«Тише» as comparative to the adjective «тихий» can be illustrated like this: «вчера была тихая ночь» [last night was a calm night] but «сегодня ночь тише» [tonight the night is calmer]. (I know this example is pretty crappy and maybe not really what could be used in real life, but hey! the grammar’s alright anyway). This adjective is also used in the following expressions: «тихий ход!» [(as a warning to drivers in dangerous areas or after a road accident) drive slowly!] and «тихий час» [hour of rest (on hospitals, kindergartens etc)].

«Тише» can be found also in another Russian proverb, but this time it doesn’t mean ‘slower, more carefully’ as in the previous proverb using it, but ‘quieter’: «тише воды, ниже травы» [lit. ‘quieter than water, lower than the grass’]. An English equivalent of this proverb I think it would be “quite as a mouse” (that’s how it is translated into Swedish anyway). What do you think? Which English proverb would you translate it into? And not only this one, but also the first one – «тише едешь, дальше будешь»?

I think it would be safe to say that Russians take their proverbs very seriously – seriously enough to put them up on their roads (where they lose their figurative meaning and acquire their ‘original’ connotation) as a way to make drivers slow down – for they’ll get farther in the end anyway!