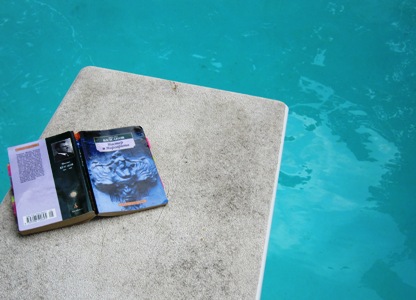 «Да, да, знаю, знаю» [yes, yes, I know, I know] – it has been almost two months since we all started reading «Мастер и Маргарита» [“Master & Margarita”] together and we haven’t made it further than chapter ten. «Честно говоря» [honestly speaking] I think we’re just going to keep reading this novel and writing a post about a chapter (or like in today’s post: TWO chapters, because one of them is really short) every week until we finish it because in every chapter there’s something interesting. By now I think it’s clear to all of us that we can find some little detail in every chapter – or in some cases, too many and too big details! – to focus on that’ll not only help us understand what «шедевр Булгакова» [Bulgakov’s masterpiece] is about, but also a little bit more about the Russian language. Today we’re covering mainly «глава 10 (десятая): Вести из Ялты» [chapter 10: News from Yalta], but also «глава 11 (одиннадцатая): Раздвоение Ивана» [chapter 11: The ‘Splitting’ of Ivan]. In chapter 10 we find ourselves at the «Варьете» [Variety Theater], located «на той же Садовой (улице)» [also on Savodaya (Garden) Street], where its financial director «Римский»  [Rimsky] and administrator «Варенуха» [Varenukha] are about to receive just what the title of the chapter is called: news from Yalta. Back in the 1930’s «не было интернета» [there was no internet] and «ни у кого не было сотового телефона» [nobody had a cellular phone] so it was not as easy it is now to get a message from «Крым» [the Crimea] to reach «Москва» [Moscow] instantly. We know that the director of the Variety Theater, «Лиходеев» [Likhodeev], has just been magically removed from Moscow to Yalta by Voland’s «шайка» [gang]. Now if this had happened right now, Likhodeev could’ve just updated «свой статус на фейсбуке» [updated his status on Facebook] to say something like «Воланд меня послал непонятным образом в Ялту!» [Voland has sent me in a strange way to Yalta!]. He could even have taken a picture of himself in Yalta with his phone and posted it on Facebook, just to prove to Rimsky and Varenukha that he was actually IN Yalta. But in the Soviet Union there was no Facebook, and smart phones had yet to be invented in the world at this point in history. So what did people in the 1930’s do to communicate with other people in places far away? They sent each other telegrams! In this chapter, a woman brings the Variety Theater something called «сверхмолния» [‘super-lightning’]. This is the same thing as «телеграмма» [telegram]: made from the word «молния» [lightning] with the prefix «сверх» which in this case means ‘super’ like in the word «сверхъестественно» [supernatural]. When sending a telegram people in the olden days tended to leave out the words that they could so as to save space. These were usually those words that the reader would understand as implied. In Russian it is not that difficult to understand which words are left out, because Russian language’s worst curse (for those of us trying to learn it at least!) also turns out to be a huge blessing sometimes: «падежи» [the cases]! Let’s see if we can put back the ‘missing’ words from the first telegram from Likhodeev in Yalta to his colleagues in Moscow:

There is a reason as to why I didn’t translate the Russian text above into English straight away. A lot of the forms of the words, like «Ялты» and «Москву», give away the meaning to the native speaker who would know that what is implied is really «из Ялты» and «в Москву». And that’s why the translation would have to be ‘from Yalta’ and ‘to Moscow’ – leaving out all the fun in the Russian original! Let’s see if we can make sense out of this sentence. I’ve placed the words I think are left out and implied in CAPITAL LETTERS, just to make it easier. If you don’t agree with me, then let your opinion be heard!

Because it would be physically impossible for Likhodeev – who just moments earlier made a phone call from his apartment to the Variety Theater – to suddenly be «в Ялте» [in Yalta], they don’t believe he is the one behind the telegram. Rimsky and Varenukha think it has been sent from a «Лжёдмитрий» [lit. ‘False Dmitry’, but in modern Russian meaning anyone who is an impostor]. The next telegram Likhodeev sends to Varenukha and Rimsky in Moscow is shorter than the first, but not as cryptically composed:

In ‘complete’ Russian this would translate into:

It is indeed too bad that the ‘ancient’ art form of writing and sending telegrams is not something a person has to master these days – not even in Russian! The genre is quite interesting, especially to someone who is not yet fluent but still trying to figure out what the «падежи» [cases] mean and what they’ll do to those innocent Russian words. In telegrams, the case will not only be visible in the form of the word itself, but also important to the whole meaning of it. Isn’t that something to think about while you’re making your way through chapter 10 of Master and Margarita?

If telegrams are a genre of writing itself, then so is the famous act of «писать заявление» [to write an announcement; statement; application]. This is a very important thing to know how to do properly both in Russian language as well as if you’re going to spend some time living in Russia. In Russia you’d have to write a formal «заявление» [announcement; statement; application] for just about everything – Russians prefer to have everything documented and in writing on proper paper. Not very surprising then, that this is what we find «Иван» [Ivan] doing in his room at the mental hospital in chapter 11: writing a «заявление в милицию» [report to the police (I’m not sure if this is the proper English translation of the act, but that’s what I think you could explain the formal process of reporting a crime to police)] to let them know about the incident with professor Voland and his involvement in Berlioz’ death. Writing a «заявление» is not that difficult, and it sure isn’t worth making it harder than it should be – especially considering that you have to do it so often in Russia! This is how it’s done:

First you answer the question «Куда?» [To where?] and put the person or the place in accusative case like this: «В милицию» [To the Police].

Then you answer «От кого?» [From whom?] and put your own name in the genitive case, just like Ivan did in his: «Члена Массолита Ивана Николаевича Бездомного» [From member of Massolit Ivan Nikolaevich Bezdomny].

All of this is written in the right top corner of the paper – usually a blank, white paper without any lines is used. After this you write «ЗАЯВЛЕНИЕ» in big letters in the middle of the paper.

The finishing formality – before you go on and explain the reason behind why you’re writing this in the first place – is usually: «Прошу…» [I ask…]. And then you put everything that you want to ask for after that. Sometimes it seems silly in Russia to have to write a whole big paper like this when the actual request is only one sentence. Ivan’s «заявление» was a much more serious piece of work – so serious that he didn’t go on to finish it but as a matter of fact ended up not caring as much about the whole incident anymore. Maybe that’s what too many formalities will do to a person? Or maybe that’s the work of… the devil, also known as Voland?