Rush Hour: How does one get around in a Russian [provincial] city? Posted by ryan on Dec 10, 2021 in Russian life, when in Russia

As I was driving home from work on the roads of my city, snow layered on thick and people driving significantly slower than they normally would, I thought of how the snow would never stop a Russian маршру́тка driver, weaving in and out of traffic, zipping around corners, and stopping his machine dead in its tracks when someone would shout suddenly from the crowd huddled in the cabin “На остано́вке останови́те, пожа́луйста!” Stop at the next stop, please! As winter closes in on us and makes driving in any city miserable, I would like to tell you about some ways to get around a Russian city.

I would like to note that I am going to describe these forms of transportation from the perspective of someone who lived in the прови́нция provinces. This does not accurately describe the situation that can be found in larger cities like Moscow, St. Petersburg, Ekaterinburg, or Novosibirsk, as these cities have large, extensive, well-funded transportation networks.

This is the classic, boring way of getting around town. Every city in the world has them, and Russian cities are no exception. But one peculiarity of Russian buses is that you don’t pay the driver. There is a person (usually a woman) called the конду́ктор who comes up to you with a little card reader/ticket printer and collects the fare from passengers. The конду́ктор also has a special seat on the bus that is sometimes raised to a comically high level (usually it is built above the wheel well) and, posted above this seat is always a sign: Ме́сто конду́ктора не занима́ть! Do not occupy the conductor’s seat! 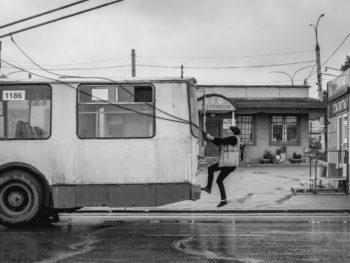 Photo by Leonid Altman from Pexels

The cousin of the авто́бус, what is known as тролле́йбус, is just an авто́бус except it has these little feelers that attach to a live wire suspended above the street, so they can only travel along a predetermined route. I can count the number of times I rode on a тролле́йбус on one hand, so I remember very little, but my impression is that it is pretty much the same experience as riding on an авто́бус. 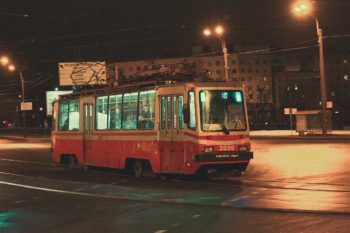 Photo by Artyom Kulakov from Pexels

Once a common way of getting around in every city, in a lot of smaller cities they are now largely seen as a nuisance, with low passenger ridership. In many places they hold up traffic, which has gotten a lot worse since Soviet times, especially if they break down or get in an accident with a car. Just like a тролле́йбус, they are attached to an overhead line.

These are little baby buses that have largely pushed out other modes of transportation in most cities. The most common translation for the name of these speedy little boxes in English is “route taxi,” as they come from the word маршру́т route.

The marshrutkas are usually packed full of people, especially at час пик rush hour, as they are the most efficient way of getting around the city. You pay the driver directly by placing 20 rubles or so into their cupped hand. In the case that there are too many people on board, you pass your fare to the next person nearest to you and say Переда́йте, пожа́луйста Pass it [to the driver], please.

Since the lines are operated by private companies in a similar way to a taxi, the driver is usually free to deck out their marshrutka with colorful drapes around the windows and trinkets like hula girl bobbleheads. The driver also controls the music. 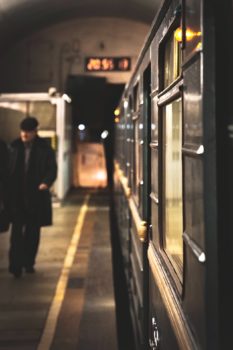 Photo by Alexandr Nikulin from Pexels

A metro is the dream of a growing Russian city, but what determines which city gets one? It’s difficult to say, but there was a commonly held belief in the Soviet Union that once a city became a го́род-миллионе́р a “millionaire city” – the population reached one million inhabitants – it was granted the right to build a metro. However, today there are many cities in Russia that have surpassed the million mark but have not built a metro. The most recent city to get one was Kazan’ in 2005.