«Прости» [Sorry] Seems to be the Hardest Word Posted by josefina on Sep 8, 2010 in Culture, language, Russian life, when in Russia 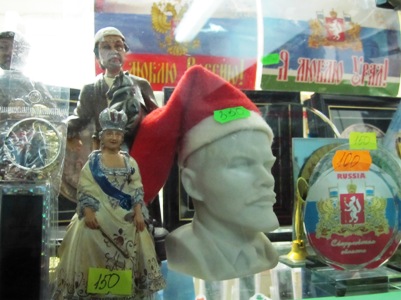 «В северной Калифорнии» [in northern California] where I’m presently living «не купить Ленина в шапке в стиле Санта-Клауса» [(one cannot/it is not possible) to buy Lenin with a hat in the style of Santa Claus]… This picture is yet another nostalgic trip down Ural Memory Lane – the «я люблю Урал!» [I love the Urals!] in the background sort of gives it away, I guess…

«Привет всем!» [Hi everybody!] Excuse me for being so informal; I should’ve probably chosen the «здравствуйте!» [hello!] variant of greeting you instead, «дорогие читатели» [pl. dear readers], but I didn’t so let’s just get this party started. In case we haven’t met before – if you’re new to this blog, for example, or began reading it without being properly introduced to the two women behind it – one of them is me and my name is «Джозефина» [Josefina]. If you’ve been reading this blog for some time now – maybe ever since I started writing for it in the fall of 2007? – then you probably know that «раньше я жила в Екатеринбурге» [before I lived in Yekaterinburg] and perhaps you even remember somewhat vaguely that «всего я жила 6 (шесть) лет в России» [all in all I lived six years in Russia]. If this is all news to you, that’s alright. I may have been forced to leave Russia this summer due to being accepted «в докторантуру в Беркли» [to graduate school at Berkeley], but because I study (and spend almost all of my time) «на факультете славянских языков и литератур» [at the Department of Slavic Languages & Literatures] I am in a highly privileged position: even here I am always surrounded by Russian language, Russian people and Russian culture – despite ‘officially’ residing «в Соединённых штатах Америки» [in the United States of America]. Are you also a student of Russian language or literature (or both!) at some department in a university? What university? In what country? «Давайте будем дружить университетами!» [Let’s be friends ‘through our universities’ or ‘as universities’!] How long have you been studying Russian language? I would love to find out more about where our «дорогие читатели» [pl. dear readers] are learning Russian.

But now for something completely different! So, what was the biggest shock for me coming to the USA after living in Russia for so long? Well, obviously I was shocked by many things. For example, American grocery stores often carry only one single brand of «гречка» [buckwheat] and American public restrooms never lack «туалетная бумага» [toilet paper]. This was all shocking to me after living long as well as prospering «в Российской федерации» [in the Russian Federation]. This one can get used to rather quickly. What I am still getting used to is how Americans tend to say ‘excuse me!’ and ‘sorry!’ all the time. They say it even though they’re only ALMOST bumping into you. Sometimes they say it while walking past you in the store or on the street. In Russia you’d be surprised if someone who ALMOST bumped into you on the street said «простите!» [(formal or when addressing more than one person) excuse me!]. I’d even be surprised in Russia if a stranger did bump into me on the street and then turned to me to exclaim with feeling: «извините!» [(formal or when addressing more than one person) pardon me!]. Does this mean that Russians are – as many a foreigner has thought them to be due to situations like the one described above – a rude people? I don’t think that’s necessarily true. I think it goes deeper than being simply rude or impolite. In general, people do not talk to strangers in Russia (see, it looks like they paid attention to their mothers when they said: “Don’t talk to strangers!”). Usually Russians do not strike up random conversations just with anybody on the street or in the store or in a restaurant. Does this mean that Russians are cold, reserved and not communicative in general? I prefer to look at it as Russians are more introvert than extrovert. In Russia people do not assume that you’re interested in hearing about their day, their week, their year or their life simply because you happen to be next to them in line at the grocery store or also waiting for that same bus. On the one hand, I do miss the Russian ‘rudeness’, i.e. being introvert – but on the other, it is refreshing to hear ‘I’m sorry!’ from somebody, for example, stepping all over your toes.

Let’s further explore how to say ‘sorry’ in Russian, for the expression ‘when in Rome…’ doesn’t always have to apply to everyone and everywhere. If you come from a culture where excusing yourself is imperative, then bring that tradition with you when you travel. Saying you’re sorry has never hurt anyone, after all. I come from a country (Sweden) where one should always say «спасибо» [thank you] whenever possible – ultimately, it should be repeated in every sentence uttered (okay, so that’s me being a teeny tiny bit ironic). This is not common in Russia or Russian language. Yet I kept on doing it during all the six years I lived there…

The English ‘sorry’  can be translated into three different concepts in Russian:

1. (feeling sympathy) «жаль» with which you can say both «мне жаль» [I am sorry] and more specifically «мне её жаль» [I’m sorry for her] – when needed.

2. (feeling regret) «сожалеть» [impfv. to be sorry] by way of which you can express yourself in the following manner: «теперь я сожалею, что сделала это» [I am sorry now that I did it].

3. (expressing one’s apologies) «простите!» [(addressing one person formally or more than one person) I’m sorry!] or «прости!» [(addressing one person informally) I’m sorry!] is what you should say in Russia when bumping into somebody. Since you usually aren’t informal with strangers on the street in Russia be sure only to use the «простите!» variant. Just so you make sure not to offend people you don’t know – and who could potentially become close friends with you and perhaps take you skiing in «Сочи» [Sochi] next winter if you play your cards right.

When you want to say ‘excuse me!’ in Russian language, you can either use «простите!» and  «прости!» – as shown above – or make use of «извините!» (for formal address or plural) and «извини!» (for singular and informal) which both translate into English as ‘excuse me!’ or ‘pardon me!’.

From the verb «простить» [pfv. to forgive] the neuter noun «прощение» is derived. It has two connotations that can both be used to say you’re sorry in Russian: 1. forgiveness: «просить прощения у кого–нибудь» [to ask for someone’s forgiveness] and 2. pardon: «прощу прощения!» [I beg your pardon!].

Also from the verb «извинить» [pfv. to excuse, pardon] a neuter noun is derived: «извинение». It has three connotations in Russian and can indeed too be used to express how sorry you are in the following manner: 1. apology: «прощу извинения!» [I’m sorry!]; 2. pardon: «просить извинения у кого–нибудь» [to beg someone’s pardon]; 3. excuse: «это не извинение» [that’s no excuse].

And last – but not least – we have a reflexive verb made from the imperfect «извинять» [to excuse, pardon]: «извиняться» [impfv. to apologize] + «перед кем?» [to whom? (with instrumental case)]. How should we use it in a sentence then? How about this:

«Я извиняюсь перед вами, что не придумала хорошей концовки для этого поста…» [I apologize to you that I didn’t come up with a good ending for this post…]