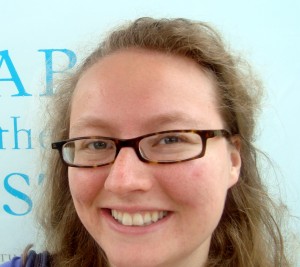 I’m going to let you in on a secret… Move closer to the screen… Closer… Even though we just posted our guest blogger invite, we (Josefina and I) have been mulling over this idea for some time. We just needed a willing test subject (aka a guinea pig). Somehow our choice fell on Vicki, quite possibly because of the funny comments she left on a couple of our posts (told ya, we really read them). To make a long story short, we asked Vicki to guest post for us and she graciously agreed, possibly because we didn’t mention anything about this being a test.

So without further delay, let me introduce Vicki Boykis:

Born in Nizhniy Novgorod, Vicki moved to the US at the tender age of 5. Amazingly, she didn’t stop speaking Russian! She currently lives and works in Washington, D.C and finds time to blog on her very entertaining blog. You can also follow her on Twitter @vboykis.

And now, in Vicki’s own words:

«Чем занимаются русские иммигранты летом в Америке?» [What do Russian immigrants do in the summer in the US?]

Josefina and Yelena do an excellent job writing about what it’s like to live in Russia, so for this guest post, I thought I’d move a bit closer to (my) home, the Northeastern United States.  It contains a lot of pidgin Russian words (italicized) that Russian immigrants in the United States use…see if you can figure them out phonetically.

In Russia, summer is often a time to be spent at the «дача» [dacha], «собирая ягоды и наслаждаясь урожаем» [picking berries and enjoying the harvest] and drinking cold beer.  Tragically,  Russians who live «в иммиграции» [in immigration] and not in «Рашка», but either in the USA, Canada, Australia, or other countries, don’t have the chance to partake in this tradition because summer homes are quite expensive and in America might require a second «моргедж».

Often, summers in the United States revolve around «шашлык» (shashlik, shish-kebab) with friends and family.  Usually, the family will pile into a car in order to «драйвать» on the «хайвей» to get to the house of the party. You can’t leave without «маленький подарок» [a small gift] to give to the hostess – anything less would be rude.  Usually it’s a bottle of wine, chocolates, flowers, or often a combination of two of the three.

Once you come to the house of your host, you’re asked to take off your «сникерси» and given some «тапочки» [slippers] from the host’s stash.   You’ll offer to help out of politeness but the hostess will refuse your help and tell you that her husband is outside, «грилает» the shashlik and will be done in a minute.

In the meantime, you mingle with the other guests before the «закуски» [appetizers] are ready.  You politely ask, «как дела на работе?» [how’s work?] and they’ll tell you that «бизнес идет хорошо» [business is going well] or that they’re not happy with job and are updating their «резюме».  They’ll ask you in turn about your new job and congratulate you on your new «бейбичка» if you’re a parent, or on the good «дил» if you just bought a new car.

Eventually, it will come time to eat and the same customs that are observed in Russia are observed in the immigration – vodka and zakuski first, then first course, then desert.  All the while, people are toasting «хозяев дома» [the owners of the house] and socializing.  The conversation might turn to whether it’s dangerous to own a «селфон» because of the possibility of «рак» [cancer], or whether a certain child is getting good «оценки» [grades] at «коледж».

If you’re at an extra-special meal, you’ll get the chance to eat some real American «турка» while washing it down with «кока кола», or you might just get all of the Russian dishes-salat’ olivye and cold summer borsch.

The meal usually ends as all Russian meals do, with «сладкий стол и чай» [desert and tea] including a nice cake that the hostess might have lucked out and bought «на сэйле».   When it’s already past midnight you’ll start to leave and your hosts will remind you «драйвать» «осторожно в темноте» [carefully in the dark]. 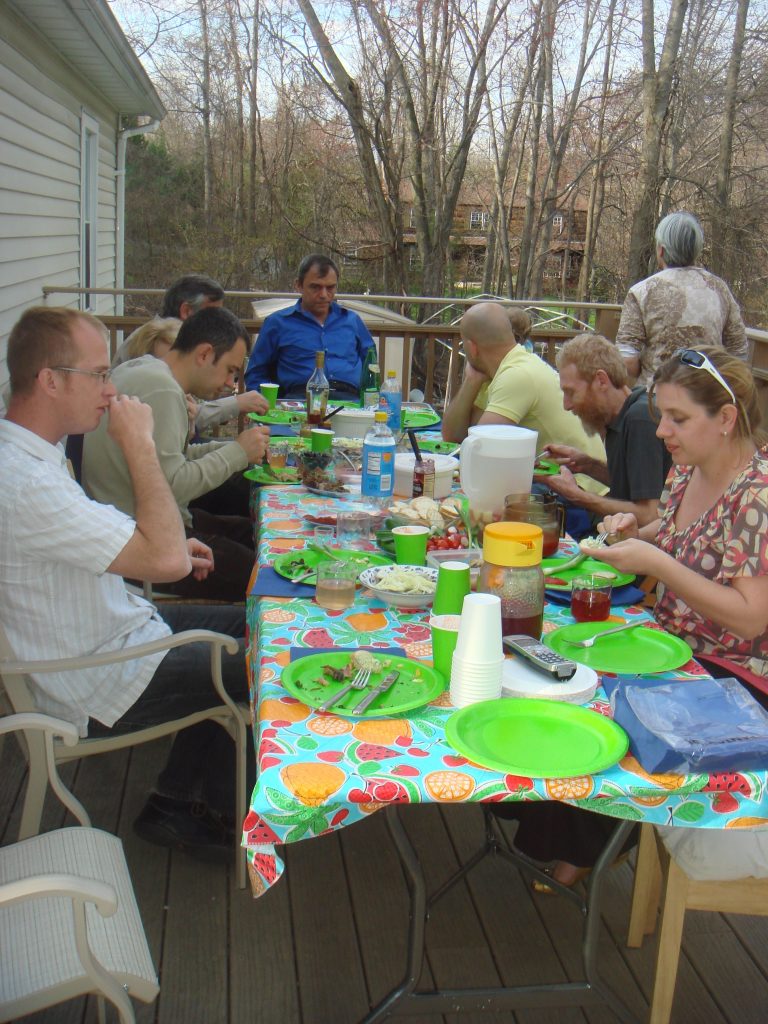 Ok, so it’s not exactly summer in this picture. But it was very hot on that spring weekend in New York. And this is a Russian partycomplete with shish-kebabs, salads, appetizers and a jug of “компот” [a cold drink made by boiled fruits and berries with some sugar]. And yes, it was an awesome party!