Forbes Most Powerful Women in Mexico Posted by Karoly Molina on Jun 18, 2020 in Uncategorized

Forbes magazine recently released its list of Las 100 Mujeres Poderosas de México 2020 or the 100 most powerful women of Mexico. The women on thee list come from a variety of industrias or industries and their contributions are varied. In this post, I want to explore some of the women on the list. 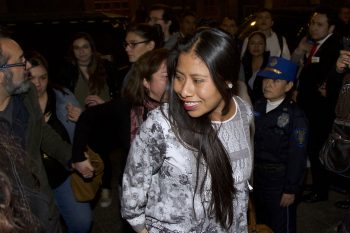 Yalitza Aparacio is the beautiful woman behind the intricate character Cleo in the movie Roma. Yalitza is originally from the state of Oaxaca in Mexico and, before becoming such a famous and recognisable person, was a pre-school teacher. You can read more about the movie Roma in this post I wrote. After her work in Roma, she has become a spokesperson and activist who focuses on the rights of indígenas or indigenous people in Mexico. Yalitza is breaking down several stereotypes and deep roots of discrimination in Mexico. Below is an interview with Vogue Mexico when she became the first indigenous woman to be on the cover of the magazine.

Doña Angela is my favorite woman on this list. She is the star of the YouTube canal de cocina or cooking channel De mi rancho a tu cocina or from my village to your kitchen. Doña Angela is a 69 year old woman from the state of Michoacán (west of Mexico City) that started her YouTube channel about a year ago. In her channel, she shares recetas tradicionales or traditional recipes from her region with ingredientes auténticos and she cooks everything in the most humble and traditional kitchen and tools. Her recipes range from complex dishes like tortitas de papa or potato patties to more complex ones like the traditional mole and barbacoa. She has about 80 videos and 2.7 million subscribers on her channel and recently received the YouTube Golden Creator prize. Below is a recipe for green enchiladas.

Keeping with the cooking theme, the next woman I want to showcase is Daniela Soto-Innes who in 2019 was recognized as the top chef of the world. She was born in Mexico City and moved to Texas when she was a teenager. Daniela studied at Le Cordon Blue of Culinary Arts in Austin and worked in several restaurants in Europe and the U.S.

Mariana Bo is a famous DJ born in Mexico. She trained as a violinista or violinist and now mixes her two music making techniques to make unique music. She has been on the lineup of several festivals like EDC Mexico, Daydream, Airbeat One Festival, and last year, she was part of the lineup of the famous festival Tomorrowland in Belgium. She has also collaborated with some of the biggest names including David Guetta, Tiesto, Above & Beyond, Steve Aoki, and Like Mike. Wee should expect to hear a lot more about Mariana Bo!

Saskia is the founder of Reinserta, una organización sin fines de lucro or non-profit organisation that seeks to end los círculos de la delincuencia (crime) y violencia, trabajando con el sistema penitenciario (prison system) y así contribuir a la construcción de un México más seguro. In Mexico, women in jail or la cárcel can have their children with them from birth up until 6 years old. This means that these children grow up in jails because the families outside jail cannot take care of them or because there is no one else to take care of them.

Reinserta works to find ways to take care of these children by arranging separate spaces for mothers with children within the jails and providing them experiences outside of jail with field trips to museums and parks so they can learn what the outside world is like. The name of the organisation, reinserta, means to reinsert or reintegrate and that is what Saskia and the many people who work and volunteer want to do: give these children opportunities to reintegrate into society. Most of these children end up in foster care after their sixth birthday without the right support or resources making them vulnerable to a life of crime. The same organizaciòn  also works with teenagers or adolescentes who have problems with the law. Through their programs, Reinserta gives teenagers tools and emotional support so that they can adapt and reintegrate without falling back on crime. By working within the prison system, we have a better chance to reduce crime in the country.

Who would you add to a list of influential women? It doesn’t have to be anyone famous; just someone you know that is making a difference, alguien que con pequeños logros está cambiando el mundo.