Venezuela’s Natural Beauty: Región Sur Posted by Anais on May 28, 2021 in Travel & Geography

“Vastness” is one of the two best nouns anyone should use to describe Venezuela’s Región Sur (Southern Region), which encompasses Bolívar and Amazonas—its two largest states, surpassing 176,000 square miles, practically half of the country’s territory as a whole. 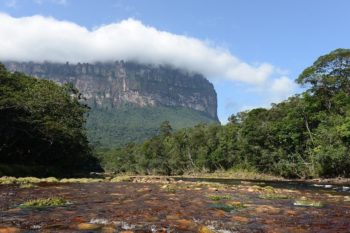 The other word perfectly suited for the South (also known as Región Guayana) is “abundance”, as those two states are home to the most varied flora and fauna found in Venezuela, as well as the most forestry, mining, and even hydroelectric resources available in the territory, thanks to its countless bodies of water, of which the Orinoco and Caroní rivers are essential.

Given how far the Región Sur is located from the country’s most densely populated areas, it offers a relatively pristine landscape that is home to the largest Indigenous populations found in Venezuela; e.g., the Yanonami, Piaroa, Warao, Ye’kuana, Pemon, and Kariña peoples, just to name a few. 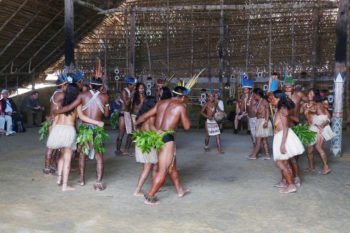 The geographical treasure from this region is the “Macizo Guayanés” (Guiana Shield), on account of its characteristic “tepuy” (a unique kind of table-top mountain found anywhere else on the planet), the renowned Angel Falls—the world’s tallest waterfall—, and “la Gran Sabana” (Great Savannah). The oldest rock formations on Earth’s surface, dozens of tepuyes rise majestically surrounded by hectares upon hectares of a combination of jungle and plains zones, resembling the natural wonder of the neighboring Amazon basin.

That is why four of Venezuela’s largest national parks are located in Guayana: Caura (29,090 sq mi), Parima-Tapirapeco (14,780 sq mi); Canaima (12,000 sq mi), also a UNESCO’s World Heritage Site; and Serranía La Neblina (5,300 sq mi). There are three others to be mentioned: Jaua-Sarisariñama, whose access is restricted to outsiders and scientific researchers; Cerro Yapacana and Duida-Marahuaca.

So, what could Guayana offer to the avid traveler? In brief, miles and miles of untamed, fascinating territory, one that is ready to be admired alongside local guides and the native tribes.