201 Swedish Verbs Posted by Transparent Language on Jan 3, 2009 in Grammar 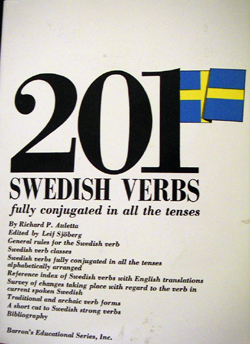 Do you like learning about verbs? I mean, learning foreign verbs? If you’re like me, you probably love it and detest it, depending on the weather.

Someone asked me not so long ago about a good book when it comes to mastering Swedish verbs. And I think I mentioned “201 Swedish Verbs (fully conjugated in all the tenses)” but honestly, I don’t know what on earth I was thinking.

I have this book. And let me tell you, as far as verb books go, this one is well, how to put it nicely… I guess “mediocre” will have to do.

The concept is great. I’ve used books from this series (Barron’s Educational Series) for learning Spanish and French. I liked how they explained everything in excruciating detail, and how the verbs were presented in all the tenses and forms and what not. It was designed for dummies like me. It was just perfect.

But the “201 Swedish Verbs” book is far from perfect. Why? Oh, let me count the ways!

Yet, if you are struggling with Swedish verbs, this might be a helpful choice.