8% of Swedes Celebrate Religious Festival Eid Posted by Chelsea B on May 14, 2021 in Culture, Holidays and Celebrations, News, Traditions 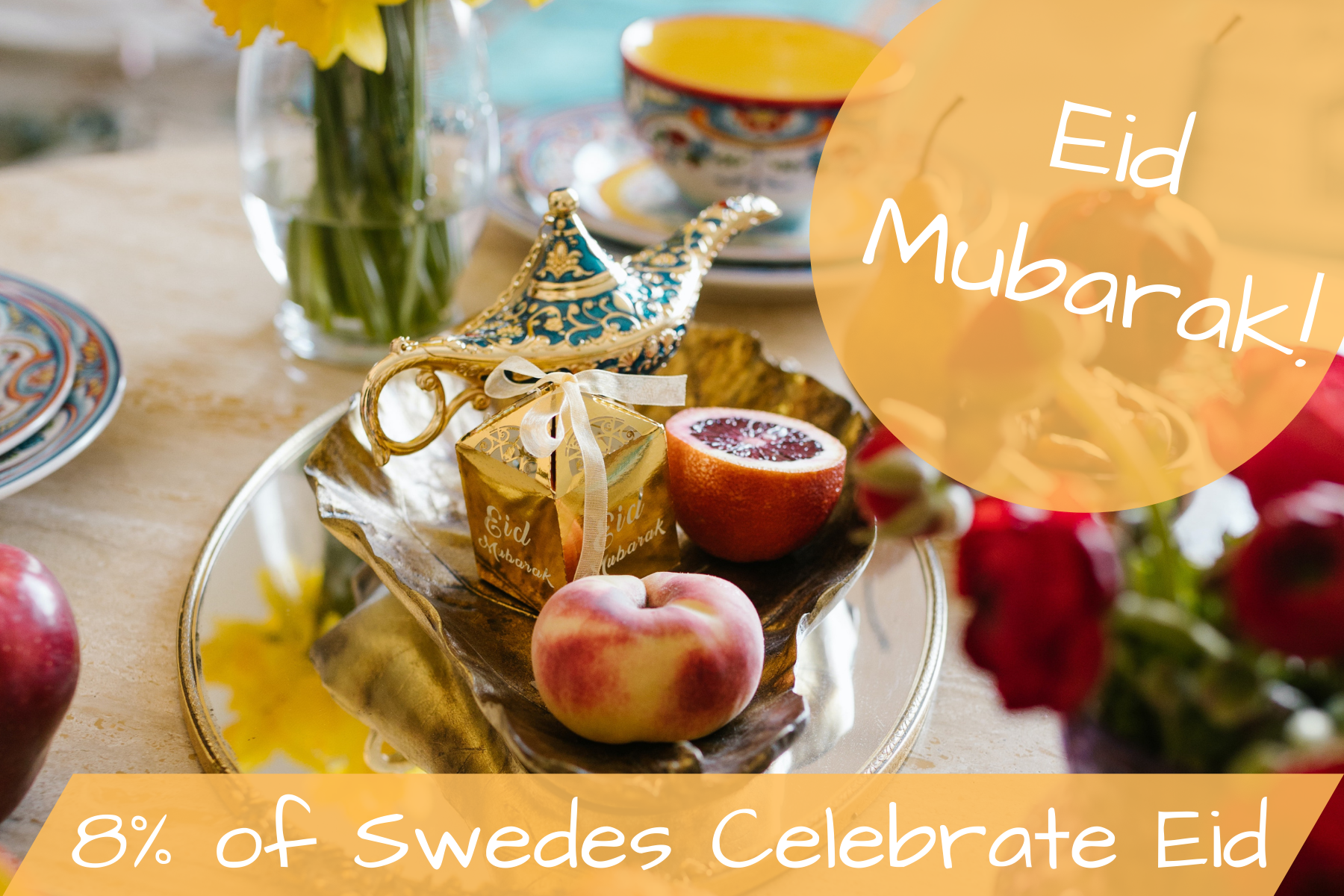 Photo by RODNAE Productions from Pexels

Over 800,000 Swedish Muslims are celebrating the end of the fasting month Ramadan with the religious celebration Eid al-Fitr. Although Covid-protocols have put a damper on celebrations this year, we’ll honor Eid with this post and learn why it’s one of the most important happenings for over 8% of the Swedish population, and Muslims globally.

But it’s worth noting that Swedish contact with the Islamic world isn’t new. Due to archeological artifacts found in Viking graves, we now know that between the 7th and 10th centuries, the Vikings had well-established trade routes ending in hubs like Constantinople, Baghdad, and the gateway to the Caspian Sea. Although the hot commodity at that time was silver Arab coins that Vikings used to melt down and sell, exotic spices like kardemumma and saffran (cardamom and saffron) were picked up during this time, and are established staples in modern-day Swedish baking.

The ninth month in den muslimska kalendern (the Muslim calendar) is Ramadan. This fastemånad (fasting month) is one of the fem pelare (five pillars) of Islam when practicing Muslims abstain from eating, drinking, and smoking from gryning till solnedgång (dawn to sundown). The end of Ramadan culminates in Eid al-Fitr, or “Festival of Breaking the Fast,” consisting of prayers, reflection, and community festivities. Eid (pronounced Eed) typically begins at sunset on the night of the first sighting of the crescent moon. But if the moon is not sighted that evening, the festival will begin the next day and can last for 3-4 days, depending on the country.

Today is a röd dag (“red day” or national holiday) in Sweden, but it’s not because of Eid. Nej, May 13 is Kristi himmelfärdsdag (Ascension Day). Because Eid depends on lunar activity rather than a firm date annually, it can be difficult for Swedish Muslims to request time off from work to observe this holiday. Although Eid lines up with Ascension Day this year, Muslims can’t count on that coincidence year to year.

Before Eid commences, it’s common to betala pengar till välgörenhet (pay money to charity), a practice called zakat. Some folks pay to individuals they know in need or to Islamic organizations that sponsor fundraising campaigns domestically and abroad. In Sweden, the amount to donate is about 75 kronor per person ($8.93 USD). Listen to a short piece from Sveriges radio about how Muslim Swedes observe this tradition, “Efter Ramadan – nu skänker många till välgörenhet.”

Eid begins in morning prayers and procedures differ between Sunni and Shia denominations. Post-prayer festivities consist of gathering together with friends and relatives to enjoy sweet and savory foods that have been missed during Ramadan. In Muslim-predominant communities, Eid is so popular that the greater community often celebrates even if they are not practicing Muslims. Thus, finding a venue to accommodate Eid practices in Sweden can be a challenge. Swedish Idrottshallar (sports halls or gymnasiums) are often booked for both Eid prayers and celebrations. Världskulturmuseet (The National Museum of World Culture) in Göteborg and Stockholms konserthus (Stockholm’s Concert Hall) have each hosted public Eid events on their sites.

Before we part, a common Arabic hälsningsfras (greeting) to wish someone on Eid is “Eid Mubarak,” meaning “blessed Eid” or välsignad eid in Swedish.

Eid Mubarak to you all, and have a pleasant rest of your week!