Beware of False Friends Posted by Transparent Language on Jun 25, 2008 in Vocabulary 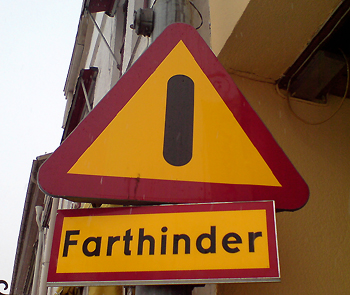 There are some words in the Swedish language that just make English speakers giggle. Sometimes even more than giggle. You know which words I’m talking about. You too had a goofy smirk on your face when you saw them for the very first time. Especially when you didn’t expect them. And then, when nobody was watching, you tried to see how these words would roll off your tongue.

The easiest one of the bunch was definitely “bra”. You repeated it out loud – bra. And then a bit louder – BRA! People just looked at you with smiles on their faces. “What a happy guy,” they thought.

And then, there was this time when you were driving and almost hit a lamppost after meeting your first “farthinder”. After a while you stopped giggling, and after a little while longer, you stopped paying attention altogether. And when the day came that you used bra and fart all in the same sentence without giggling, you realized you’ve been in Sweden for a lot longer than you thought.

False friends (sometimes mistakenly called “false cognates”) can be a source of much joy when learning a new language. Swedish is no different. And to add to the hilarity is the fact that these Swedish false friends mentioned above look very naughty to an English speaker.

Yet in fact they are perfectly innocent.

Bra = fine, well, good.
If somebody asks you how you are, you can simply answer “bra!”

Fart = speed
Yeah, I know what you’re thinking, and I’m not even going to go there.
And the ubiquitous “farthinder”? It’s simply a speed bump.

Other false friends you might want to remember are:

And I’ll let your Swedish (non-false) friends teach you the truly nasty sounding ones, OK?